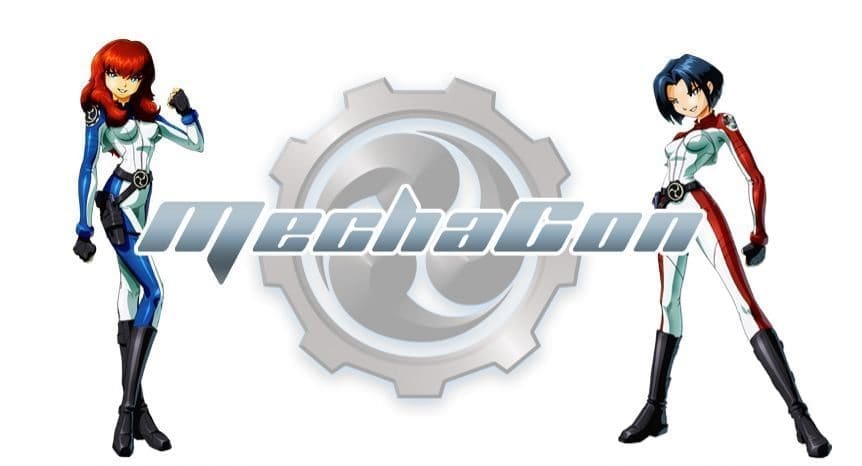 I’ll never forget the look on that old man’s face when I walked through the mall in full-out Joker cosplay. I’ve done a lot of stupid things in public for a laugh. (Like crawling around on the ground, pretending I lost a contact lens, just to see how many people would join in.) I’ve even stood on a stage in front of the whole school and sang “Macho Man” in overalls and a construction helmet. But that was the first time I felt like a legitimate freak. Not sure if I liked it.
This was my first year at MechaCon (I even got a button from a friendly staff member) and I had high expectations for this event. I was not disappointed. The dealer’s room was one of the best layouts I have seen at a con and the gaming room was unbelievably fun. There was a whole section in the gaming room for LARPing (Live Action Role Play) and at one point during the night, I even watched a sword fighting class. (Hard to keep a straight face when the instructor is yelling in Kenshin’s face like drill sergeant.)

The staff were kind and easy to work with and I was quickly arranged to have an interview with one of my voice acting heroes, Steve Blum! I was immediately impressed with Blum’s kind and light-hearted demeanor, despite the fact that he was incredibly busy and barely had time to breathe. When asked about some of his most positive recording experiences, Blum replied by saying that he really enjoyed working with the amazing cast of Star Wars Rebels. “They’ve become like family,” Blum said. He then added that he still texts the cast of Transformers and Cowboy Bebop was important to him because it was a real game changer.

Blum then told a hilarious story about an 80 pound fangirl who came running and jumped up into his arms at a convention. She caught him (and his FOUR bodyguards) completely by surprise and knocked him down flat. Blum laughed and said he was upset at the time (because OW), but now he is able to look back at the incident and feel touched that she was so excited to meet him. He said the he is inspired every day by his fans. I got a lump in my throat as he told me about a kid with autism that spoke for the first time in front of him because he recognized his voice. He continued to speak of some soldiers he had met who told him they played Call of Duty to unwind after a hard day. “I’m inspired every day by their stories,” Blum said, “and I love to see how they were affected by my work.”

When asked about his hobbies and leisure activities, Blum’s wry chuckle said that free time was a foreign concept. He smiled and said that when he does have time, he enjoys the outdoors. He likes cycling, swimming and spending time with his many pets. (Three dogs, three cats and a tank of fish!) He also gushed about spending time with his girlfriend, Mary McGlynn, whom I also interviewed. She is the voice actress for Julia, the counterpart to Blum’s Spike in Cowboy Bebop. (Among many, many other things. More on her in a bit.) The two of them have been a couple for a while, but have kept it under wraps until now. They were adorable calling out to each other from their booths. They even got matching tattoos. Blum’s is the Toonami symbol on his forearm, which brought me to my final question. Blum has brought many magical worlds to life, but if he could choose one to actually live inside, which would he choose? His answer was the Digital World in Digimon. He said there were endless possibilities in that world and he would love to try new things.

I was impressed as I watched Mary McGlynn greet each of her fans with a gracious smile and patiently listen to each and every fan’s story. When she had a moment, it was a pleasure to speak with her. She didn’t have a particular favorite experience in the recording studio, but reflected on the special individuality of each cast. “It is an intimate and creative process. You find yourself in a room with a group of trusted people and are handed this blank slate.”

Her favorite fan moment was being in an elevator with a group of girls in Boston. The girls saw her and recognized her, so when their floor came up, they ignored it and stayed on to talk with McGlynn. They all had a good chat and after McGlynn got off on her floor, she heard the girls squeal in delight after the elevator doors closed behind her. (Elevators are not sound proof, hahaha!)

Speaking with her further, it was fun learning that McGlynn is an “amateur space nut,” in her words. She loves taking pictures of the moon and is amazed by space exploration. (Which really shows in her role as Hilda in Outlaw Star.) She admires Jennifer Lawrence, and Tress McNeal, who just won an Emmy for her performance in The Simpsons. She added that she couldn’t choose just one world to live in (out of the voice acting jobs she has done). “All of those worlds enhance the other,” she concluded as another wave of fans rushed in to meet her.

The next guest I had the honor of interviewing was Austin Tindle, the rising star of voice acting. He has already broken our hearts as the actor for Marco Boldt in Attack on Titan and sent shivers down our spines in the role of Ken Kaneki in Tokyo Ghoul. Despite this, he is incredibly humble and kind. As he talked about his experiences in the past, he spoke fondly of Tokyo Ghoul. “I’m still growing as an actor. I enjoyed Tokyo Ghoul, not just because it was a good plot, but also because the character goes through such a transformation.” He added that he learned a lot as a voice actor as he was challenged to use a huge range of vocalization and watch his character grow. He confided that voicing violence is hard to do and he is continually trying to find new ways and nuances to voice pain.

He politely said he hasn’t had any big fan moments, but the second he said that, I watched a fan come up to his booth, breathe right in his face and practically swoon when he said he had voiced Marco Boldt and Ken Kaneki. After his breathless fan left, he continued to say that his first fan moment was when his cousin found out what roles he had done and it got really awkward. He also recently had a Twitter imposter. “I was kind of excited because it was a milestone, but then I hated it because he was saying nasty things to some voice actresses.” Luckily, his coworkers and friends realized quickly that it wasn’t him and the incident was reported.

Tindle said he admired several actors, but the main two that he mentioned were Robert Downey Jr. because of his charisma, (Who doesn’t love that guy?) and Josh Grelle. (Grelle was a guest at LousiANIME this past March.) “Josh Grelle’s vocal range is similar to mine, so I really look up to him. I’m always impressed with his range. I hear him in the booth and I think ‘Wow! Who is that?!’ and sure enough, it’s Grelle.” Tindle continued to say that Grelle’s work as Armin greatly influenced his perception of his character Kaneki in Tokyo Ghoul.

When I asked him which anime world he would like to live in, he said that most of the worlds he voiced acted in something terrible happens to him. (Wait, he wouldn’t enjoy being tortured or bitten in half?) But then he mentioned Bento. A world where people rumble over half priced bento lunches from the grocery store. “They show a special gratitude for the meal, there are no monsters after you, but it’s still adventurous,” Tindle said with a smile.

After exchanging farewells with Tindle, I then had the opportunity to interview Mike McFarland, someone I have always wanted to meet. He has voice acted for several hilarious roles such as Master Roshi in Dragonball Z and Ranka Fujioka from Ouran High School Host Club. He has also shown incredible diversity in his acting skills in his roles as Cain from Trinity Blood, Lt. Jean Havoc in Full Metal Alchemist and Jean Kirstein in Attack on Titan.

However, when I spoke with him, he said that his favorite moments in the studio have been as a director, rather than an actor. He reflected on his experiences in Summer Wars and Wolf Children, saying he preferred directing shows that were focused on family relationships and parental roles. He then began to discuss his time as a student. I was amazed to hear about his experience doing a workshop with Wayne Brady and his time doing improv acting and a “groundlings program” in California. Out of all the actors he has worked with and looked up to, his main idols are Michael Fassbender, Titiana Malsany (“She is stupid good”), and Meryl Streep.

In his rare and precious free time, McFarland said he prefers doing low key pastimes like watching movies. “And you know. Sleeping. Eating,” he said with a wry grin. Other than that, when he travels he enjoys trying new foods and tasting the culture.

McFarland has a huge fan base (he even was mildly stalked by a guy while I was interviewing him), but his main story about a fan involved Vic Mignogna. They were signing autographs and McFarland noticed a girl standing in line “bouncing up and down the whole time she was in line.” When she got up to Mignogna, he smiled and said his usual “Hi Sweetheart, what’s your name?” The girl screamed and jumped OVER the table and glomped the poor guy. (I’m noticing a trend here. Readers, stop jumping on your favorite celebrities.)

To wrap it up, McFarland told me that he wouldn’t want to live in any of the worlds he voiced acted in. “In Dragonball Z, I’d be the only one who isn’t a Super Saiyan, which would suck, NO WAY would I live in Attack on Titan… They all have their own problems and I wouldn’t really want to live in them.” Unfortunately the real world has problems too.

It was a true honor being able to meet Blum, McFarland, Tindle and McGlynn and I’m excited to see what they do next. MechaCon was a wonderful experience and it was exciting seeing characters from my favorite shows. Hilarious moment for me was seeing someone cosplaying as Freed from Fairytail calling out “Where’s my LAXUS?!” I was able to see some familiar booths from LouisiANIME (including the cheesecake pillowcases, hahaha!) and pose in a “Wanted Poster” frame with my daughter. (We were cosplaying as Joker and Harley Quinn.) So if you’re ever in New Orleans at the hottest time of year, come to MechaCon, where being a geek is cool.