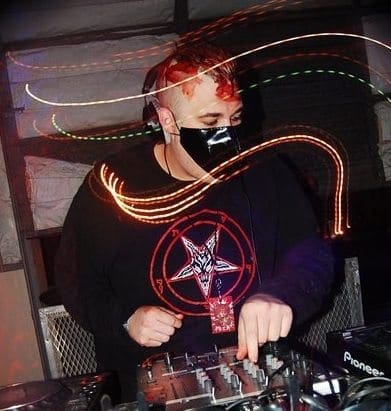 I like to think the Phoenix area has a pretty successful club scene going on.  Scottsdale and Mill Ave are the places that come to mind when you think of drinking, dancing, and flirting on Friday and Saturday nights.  If the trance/techno and hip-hop scenes aren’t really your thing, then you might want to check out a Fetish Ball or some kind of event hosted by the very erotic and wicked people at Horns and Halos – more about those nifty people in a later article.  With that in mind, a newer member of our DJ family has recently caught my eye.

He goes by the name DJ Dark Mark, and you can often see him in action at said Fetish events.  His style would probably appeal more to those who frequent the goth clubs.  Instead of the “Castles in the Sky” type of trance you’d expect to hear in a typical nightclub, it seems he is more prone to giving off hard, fast, and stimulating beats and noises.  And to make things a little racier, you will often see him sporting a surgical mask, which speaks a lot about the types of clubs he spins at.  It’s like every day is a sexy Halloween party!

I had the pleasure of talking with him a couple of weeks ago, and so I asked him a series of questions about his exciting line of work.  I must say, he is quite the sweet heart, even though he is a rather busy fellow.

Well, it started out with getting into “electronic” music first and took a few years to get that desire of getting a dance floor going. I had just turned 21 and my friends took me to a nightclub appropriately named Tranzylvania (at the Palazzo). I had been an avid metal head for many years and had attended hundreds of concerts.  I didn’t know I could find the same love I had for metal as I did for electronica. I enjoyed the music played and the darker feel that I didn’t know existed for that type of music. When I heard Prodigy’s song “Smack my B!tch up”, I was officially hooked.  After that, I found a love for all the types of things in the nightclub scene for industrial/electronic music, and after a few years, I asked the resident DJ of Tranzylvania if I could watch what he did and take notes. I love music as a whole, and to be able to add to what music already did for me, just made me want to dive into it as soon as I could.

I have a lot of influences in the community. Many of them are the DJ’s that have been keeping the AZ goth/industrial scene going for a lot longer than I have been around. I always have to give a shout out to Rob Poe (DJ Noiz.fkr) for giving me my start over at Tranzylvania.

I have new favorites all the time. I am definitely a fan of the newer age of electronic music versus the older stuff. When you ask other people that same question, most of them will pick one or the other. However I believe no one can really deny both eras have club hits that will always be played to keep a dance floor going. I keep my music to 2003 and after almost exclusively.

For my “real” job, I am a laboratory assistant over at Chandler Regional Hospital. I started working there almost 10 years ago as a phlebotomist (drawing blood), and I’ve been moving up in the ranks of the lab ever since. I basically work on anything that comes out of your body. This job keeps my love for music and DJ’ing alive, that’s for sure!

5.      If there was one artist you could collaborate with, who would it be and why?

I would love to collaborate with many different artists out there. However, once I start producing music, I already have a list of what I want to do and [that will allow me to] hopefully make some great music!

I mainly play “club” nights around the valley at venues like Sanctum, Anderson’s 5th Estate, Venue of Scottsdale, Chasers, Palazzo, and The Marquee, just to name a few. Most venues in the valley are willing to work with different music nights to bring in more people and have a great time. I will play a house party now and again to just do whatever I want and explore musically. Currently, my favorite gig is being the resident DJ for Horns and Halos (AZFetishball.com). They are quarterly events over at the Venue of Scottsdale.

7.      What has been your most memorable performance so far?

My most memorable performance would have to be the closing night of “Tranzylvania” over at club Palazzo. It was my favorite club to attend, and it was the club where I got my start at DJing. That night was absolutely crazy. I believe there were around 650 people that came and packed it inside and out. Noiz.Fkr and I went out with a bang!

The current pieces of equipment I use are 2 Pioneer CDJ/MIDI player model 400’s, a Pioneer DJM 600 mixer, a HP Pavilion dv7 laptop with the software Traktor pro 2, as I connect them to the CDJ’s to make one big working unit. I hope to get new gear in the coming years. They are very expensive, but very reliable!

Ah, my nick name. I will never forget how I received this catchy name. It was about nine years ago and I was at a metal-core show over at the Venue of Scottsdale. I went with a group of friends and met a lot of new people during my “metal” years. A group of kids in AZ known as x24x were a blast to hit up at all the metal/hardcore shows. One night, my buddy Andrew was hanging outside with me and said out of nowhere, “I think your name should be Dark Mark; it just makes sense and everyone will know it’s you.” I laughed, started throwing it around, and now more people call me Dark Mark rather than not, whether it’s at work or out having fun!

10.  Does your family ever attend your events, and how do they feel about your music?

My brother has been to one event of mine a few years ago, and my parents came out to my 21st birthday party/show (I was not DJing then). They had a blast! My family fully supports what I do and they generally want to come out to my bigger events. They want to make sure they can have a nice table to sit at, have some drinks and a way home *laughs*. My mother keeps up with me all the time using Facebook, as I use that as my main promoting tool, and she loves seeing all that I am involved with. I totally have an awesome family!

11.  It looks like you’ve got some pretty awesome goth/industrial types of attire in your closet.  Where does DJ Dark Mark shop for clothing and accessories?

I almost always buy everything I own by shopping online. From boots to pants to socks, as well as CDs and more. I’ve always had great experiences from online sellers that make custom pants and shirts, so I know exactly what I am getting. I am on a current journey to lose 120 pounds by my wedding day of March 30, 2013, and I am sure a whole new world of clothing will be available to me!

DJing is a blast. There aren’t many jobs out there where it is okay and even encouraged to drink on the job! In all seriousness, it’s definitely something that should be done not in a way to make a living out of, but on the side as something fun that will make you some extra cash. If you love music, it just makes sense to mess around with it and work it all together to flow as one great mix. And of course, it’s great to have people listening and dancing to it! DJDM released the second version of his live mixes.  It’s called Bass, Treble, Kill, which is appropriate for how it makes you want to dance, yet bang your head at the same time.  The SoundCloud page includes the track listing, so you have an idea of the artists and type of electronica he’s into.  I’d like to mention that he’s using tracks from Aesthetic Perfection, Icon of Coil, and Covenant – three of my absolute favorite artists in the industrial/EBM (Electric Body Music) community.  He switches it up though with many other diverse artists, including The Prodigy and LMFAO.  His tastes are definitely not limited to one type of electronica, and he has learned how to blend them all together in a way that keeps it fresh and energetic.  This is only the beginning of DJDM’s reign in the Arizona club scene, and if I didn’t know any better, I’d predict seeing him in places like Vegas very soon.

You can catch DJ Dark Mark these upcoming events! You Don’t Have to Wait ‘Til September to Talk Like a...