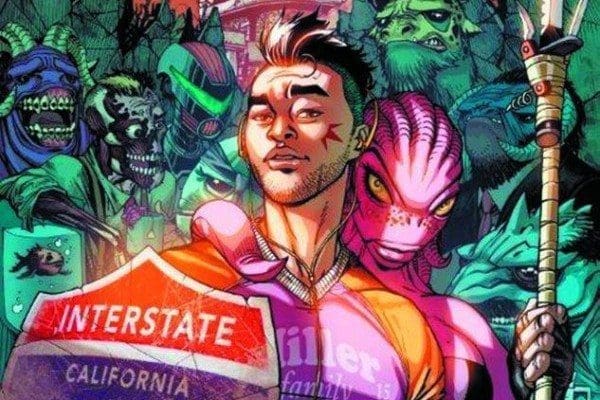 From the writer of THE BUNKER and the artists of GREEN LANTERN CORPS and BATMAN BEYOND, KING is an action/comedy about the last man on Earth living in a post-apocalyptic Los Angeles.  The unique art style by Bernard Chang and Marcelo Maiolo is as outlandish and bizarre as the strange new world that Joshua Hale Fialkov created.  The color scheme is a faded pastel pallet with some twilight shading which adds authenticity to the end of the world we know.

When I started to read King, I had to mentally wipe my slate clean of everything I knew and let the creators build everything up from the ground.  There isn’t definite knowledge of how the world ended.  The reader just knows that the world is now a place where it is perfectly normal for Olympian gods to be walking down a rainbow with purple squids clinging to their necks.  Of course the protagonist would be attacked by a karate robot bear that shoots poison out his nipples.

The hero is a sarcastic, mohawked punk that the reader loves from the first page.  He has no qualms with slicing someone’s throat open or punching his dinosaur coworker in the balls.  He knows how to survive in the crazy world he lives in and how to stand his ground, which is exactly what we want in our anti-hero!

What else could possibly go wrong when the world has already ended?  King is bound to have the readers tearing through the pages, eagerly anticipating the impossible to happen.  Don’t miss out on this new series by Jet City Comics, coming out on August 19th, 2015!