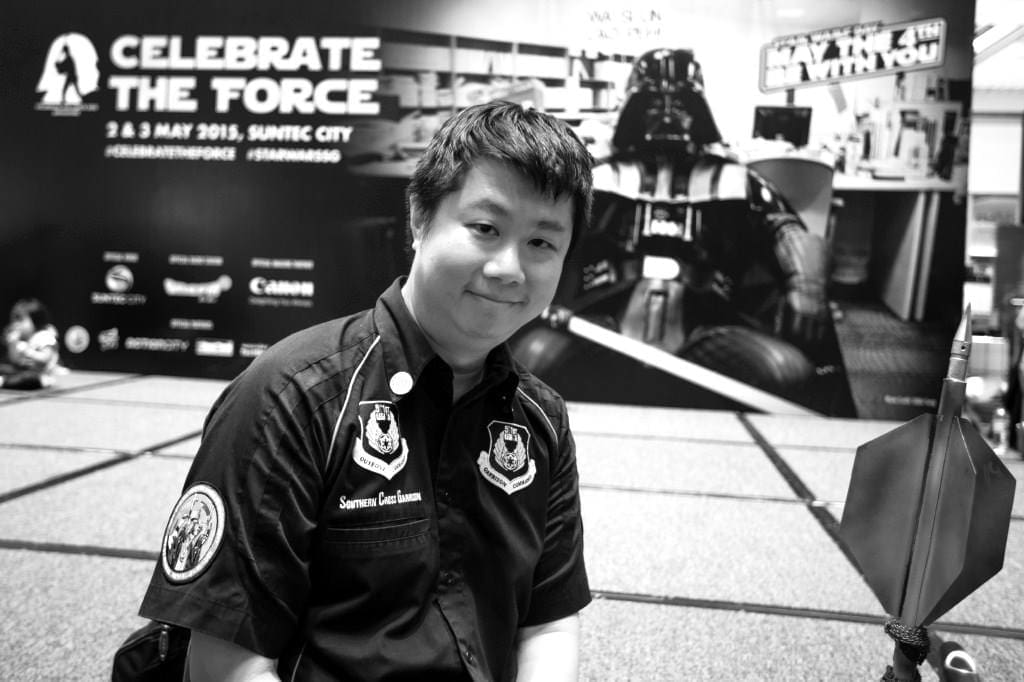 Also known as:  The Guy That Makes Me Constantly Mutter, “What time is it in Singapore?”

What is your favorite costume, and what does it mean to you?

Episode III Royal Guard, because you never forget your first.

Without the immense number of pricks, yes.

What is it in your personality that allows you to shamelessly run around in public dressed in plastic?

So you’re not a “face character” guy then, I guess.

I once thought of doing an Imperial Admiral. So far, no face character has been practical for me.

What is this “practical”? WE DON’T DO PRACTICAL, DOM. What was your favorite troop ever?

I’m actually looking forward to a troop later this month, which might well be the favourite one. It’s a multi-unit troop involving Rebel and 501st members from Hong Kong, Macau, Taiwan, China, Japan, Indonesia, Thailand, the Philippines, and Singapore. With this much variety, the level of crazy will be quite gratifying.

I’m having some envy, hearing that. Send pictures afterward–especially if Olivine and Tyrene are there. Love those chicks. You’re also okay, I guess.

Not Olivine, but Tyrene yes. Shuichi Honda will be there. Craziest, funniest guy from Japanese RL.  Everyone loves him!

Sounds like my kind of dude. How did you end up in the Legion?

By accident. You see, it was a moonlit night in old Mexico. I was walking alone between some old adobe haciendas, and suddenly, I heard the plaintive cry of …

That’s yet another wrong franchise, I believe.

Who are your favorite Legion personalities, and why?

The fluffy ones. So. Fluffy. Seriously, though, there are those who labour to stabilise and/or improve the organisation in many ways, sometimes in secret, other times under the harshest public glare.

The credited response was, “The Redheads.”

Then God have mercy on the rest of you. Has trooping ever brought a tear to your eye?

Frequently. My country has a torrid, humid equatorial climate. Sweat always gets into the eyes.

And yet you won’t come to Phoenix. Poor.

By the time I get to Phoenix …

Right. Do you have a favorite unexpected moment with a fan?

A few Novembers ago, I ended up in a multi-unit troop in Japan at the foothills of Fujiyama, wearing my Magma Trooper. That’s like a Stormtrooper, only red in colour, and the locals were mostly going “sugoi-ne!” – it means “cool”, “awesome”, “TAKE A GANDER AT THAT!”. . . but sometimes they’d claim “akai-desu!” to point out the red. Among other things, this little girl came up to me and held my hand, and that felt heartwarming. Which was good because it was springtime, which is cold enough for a tropical islander like me.”

We actually walked some distance hand in hand (her mother was taking photos) and I felt, OK, this was probably innocence, right? She’s just a little kid, and she probably made the (wrong) assumption that the red colour meant it was a woman under the armour.

Then I showed the photo to a friend of mine, who lived in Japan long enough to pass off as a Kyoto resident (she’s ethnic Chinese like me, so cue the “all-look-same” jokes here). She took one look at the photo and said no luck, buddy, that’s a hormonal teenager.

Chicks dig the armor, man. Who was the first Legion member you ever met?

Apart from all the inception stuff? It’s got to be this guy called Reno. He was the founding Executive Officer (i.e., the #2 guy) of the Singapore unit. Also a massive movie fan all around, generous, gregarious, go-getter, and other G-rated stuff. He’s a lot less active now but takes care of his small group of costumers who handle a lot of things that the 501st doesn’t do. I costumed for him once, unpaid, as Ricky Gervais’ insufferable bowtie-wearing pommy git character in Night At The Museum Number Whatever – The One With Ben Kingsley.

How do I not know a Singaporean named Reno? It sounds like we should be buddies.

Trooping for money, I guess. He wanted it, others didn’t. He doesn’t always get paid–he’s a hobbyist too.  But he is a dear friend and helped build up the unit in the early days, when it was an Outpost, and within the local Star Wars fandom his group fills a niche that the 501st doesn’t. Good thing the IP owners much prefer to engage him for their publicity events than sue him.

What thing have you done for the Legion that you think has made the biggest impact?

Objection, Your Honour. That is privileged information; motion to expunge and suppress.

You’re still a goof.
YOU DON’T SCARE ME, DOM.

It’s never me that scares. Never! 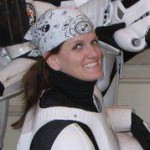 A Joker Awakened: An Interview with Author and Impractical Joker James...