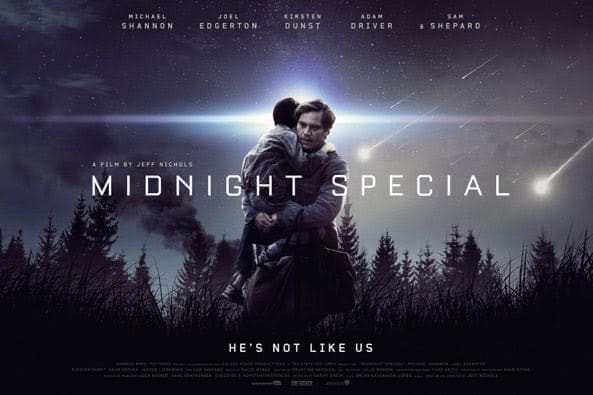 Jeff Nichols is one of those very under-the-radar types of directors. His films are usually comprised of very complex characters involved within a somewhat unusual situation which takes place in the southern part of the United States. He tends to cast a lot of well-known actors (Matthew McConaughey, Jessica Chastain, Adam Driver, Michael Shannon) and has then portray characters that you wouldn’t automatically associate with them with. Overall, Jeff Nichols is a director who is willing to try something different with every new vision that he has and engross the viewer in a incredibly layered narrative. His newest film entitled Midnight Special is able to embody all of those sensibilities but add a science fiction twist on top of all of it.

Alton (Jaeden Lieberher) is a mysterious young boy who wears blue swim goggles, loves reading comic books, and has insanely bright light shine out of his eyes. Alton’s father Roy (Michael Shannon) and Roy’s friend Lucas (Joel Edgerton) are two men who will stop at nothing to protect him from the numerous forces that wish to use him for their own selfish needs. Paul (Adam Driver) is an NSA official working with the FBI  in order to uncover what exactly is so special about the boy. A mix of sci-fi elements combined with religious beliefs surround Alton’s true existence in the world.

First rate performances from the entire cast. Michael Shannon is excellent as always and is able to show a softer side while being an insanely over-protective father. Joel Edgerton elegantly plays his character with a more mysterious angle whose motivations are only slightly understood. Jaeden Lieverber is the heart of the film and his performance gives a immense gravitas to the challenges that the characters must overcome time and time again. While Adam Driver does a very good job with the material he is given, unfortunately his character falls into a more stereotypical realm that prevents him from feeling more fleshed-out and three-dimensional.

Midnight Special is a film that loves to take its time and not give you all of the answers to all of its many questions. Some people may hate the film because of that aspect but for me it made the experience even more enjoyable. By leisurely drip feeding information it helped to keep me engaged with every new element that is introduced and adds an extra weight to their importance within the story.

Although this review may be full of praise, unfortunately the last act of the film fell completely flat for me. It’s not appalling or even bad but it’s just simply way too ordinary. It borrows a lot of elements from E.T. and Close Encounters of the Third Kind but it feels like it almost amounts to nothing in the end. However, the journey to that destination was phenomenal and included a lot of pleasing twists and turns which allows me to forgive it for all of its faults. Midnight Special is a fantastic piece of science fiction that is worth seeing due to the incredible performances and great new genre elements.

Synopsis: A mysterious young boy and his father are being chased by people who wish to understand what makes the boy so special.