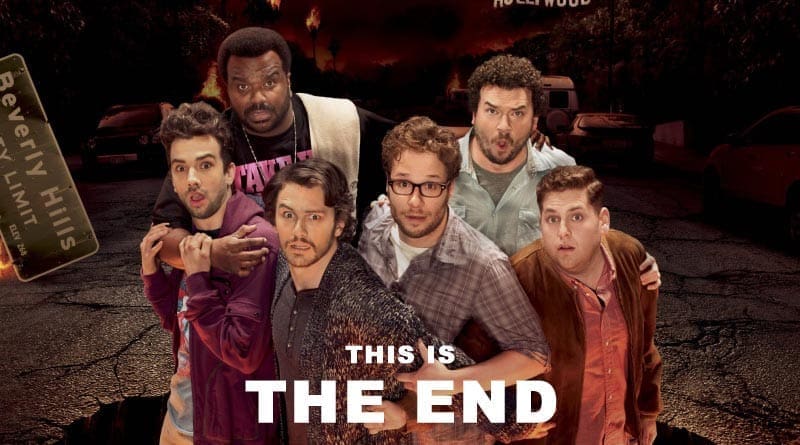 Zombies. Outbreak. Umbrella Corporation. Tiny robot bogs that suck up all the electricity. We are in no short supply of apocalyptic scenarios in Hollywood, but the one we all seem to forget about; the Biblical Apocalypse (well at least Hollywood seems to have forgotten about it.)

I know for me, I sat in Sunday school for years learning how to cleanse my soul and be a good person for fear of being left behind. Seth Rogen and Evan Goldberg bring the bible to life in a hilarious way to show us how it would be if the Biblical Apocalypse happened to the people of Hollywood.

Jay Baruchel plays himself as a Hollywood hipster, hating everyone and everything about Hollywood, and comes to visit his fellow Canadian friend Seth Rogen for a weekend of good fashioned fun. As he desperately attempts to get Jay to be a part of his new Hollywood world, Seth takes Jay to James Franco’s new house to party with Seth’s new/other best friend, Jonah Hill, whom Jay absolutely hates. However, a bonding moment between Seth and Jay on a munchie run is ended, as the trumpets of heaven announce God’s presence, and they witness people being sucked up into the sky. Obviously, it is followed by chaos, sinkholes opening up to hell, stampedes, and a lot of death.

The genius of the movie lies in what happens after the initial downfall. They battle with the three huge issues: finding resources, fear, and boredom. I mean think about it; I know in an apocalyptic scenario finding food, water and saving your butt is the number one priority, but how do you stay entertained? True to form, there is a lot of drugs and alcohol to keep them entertained, resulting in the hilarious creation of sequels to their own movies. After the boredom, drugs, and alcohol have run their course is where the real survival story unfolds. Tensions run high and our band of comedic misfits must come to grips with their own mortality and souls.

This is a great movie for those who are looking for a good laugh, perfect for those who like “dude humor”. There were plenty of times during this movie where I was like, “Really? They put THAT in?” along with a few “Come on, move it along”s, and I am sure you will think so too. The movie, however, got extra bonus points with me with a special appearance by a favorite boy band of mine.

Should you see it in theaters? Nah. Have a party with some friends and watch it when it comes out on blue-ray.

Synopsis: While attending a party at James Franco’s house, Seth Rogen, Jay Baruchel and many other celebrities are faced with the apocalypse.

Jason Stone (based on the short film “Jay and Seth vs. The Apocalypse” by)

“RISE OF THE GUARDIANS” Review