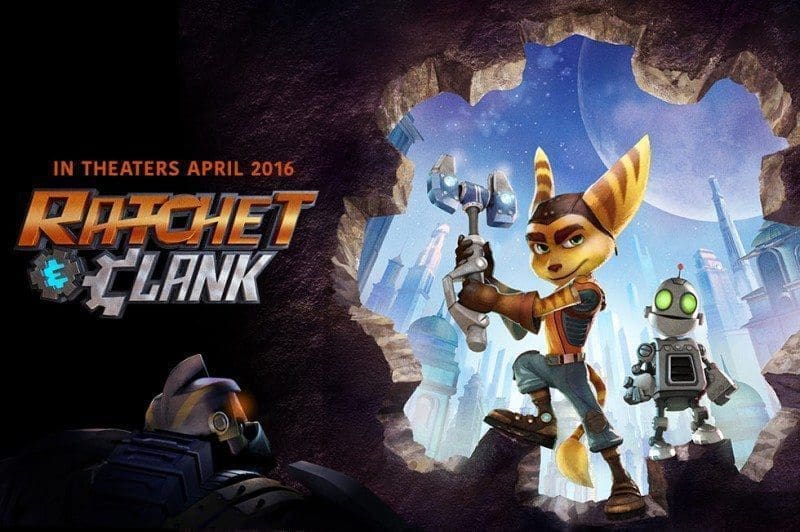 On November 4, 2002 an action/platforming game entitled Ratchet & Clank debuted on the Playstation 2. It was a game developed by Insomiac Games and published by Sony Interactive Entertainment. You play as a fictional animal named Ratchet who teams up with a small robot named Clank to try and save the galaxy from an evil overlord.  The original game was a fairly big success at the time and it went on to spawn eleven sequels/offshoots and one reimagining which was recently released on the Playstation 4. To coincide with the newest iteration of the franchise, directors Kevin Munroe and Jericca Cleland have created an animated feature film which mirrors specific elements from the game.

The film tells the story of Ratchet (James Arnold Taylor), a mechanic who dreams of one day becoming a Galactic Ranger – a superhero that defends the galaxy from evil. Due to the villainous Chairman Drek (Paul Giamatti) and Dr. Nefarious (Armin Shimerman) destroying several planets, the Galactic Rangers are forced to hold tryouts in order to recruit a new member to help them stop the terrible madmen. Through pure happenstance, Ratchet ends up befriending Clank (David Kaye) and the pair end up thwarting an attack on their home world and  becoming Galactic Rangers. Now they must team up with the group in order to try and stop Chairman Drek and Dr. Nefarious from destroying anymore planets. This if a film specifically designed and targeted for children. Now that doesn’t mean that it’s a bad film whatsoever, it just means that there isn’t any subtle adult humor infused within the jokes. In addition, the story is very by-the-numbers but not enough to be overtly offensive. There are a couple of somewhat clever uses of characters with Captain Qwark being an example. He’s the stereotypical bulked up superman-type that thinks way too highly of himself. Think of Rainer Wolfcastle from The Simpsons or Zapp Brannigan from Futurama but with a lot less charm and wit. He helps to bring a lot of energy to the film as a whole but isn’t clever enough to be outright funny. Ratchet and Clank are fine on their own but they lack the necessary charisma to make you truly care for them when they end up in dire situations. On the other hand they do exude a lot of charm which goes a long way to finding them interesting and fairly likable.

In comparison to a lot of other animated films that are also somewhat low key in terms of marketing and public awareness, Ratchet & Clank features a very splendid visual palette. It’s definitely not as detailed or nuanced as a Disney or Dreamworks film, but it does feature a specific style that raises it above films like Norm of the North or The Nut Job. It dazzles with great use of the color spectrum and characters that are truly unique and appealing.

When everything is said and done, this is simply a film that won’t appeal to adults. Nevertheless as a fun showpiece and video game adaptation, Ratchet & Clank will have children smiling from ear to ear.

Synopsis: A fictional animal and a robot must team up with a super squad to help stop two evil madmen from destroying the galaxy.