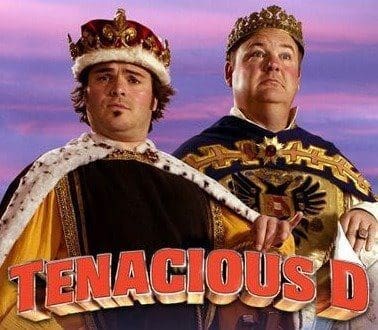 A few weeks ago, I was feeling a little nostalgic for music I listened to in high school. I found myself throwing songs from Tool, Nine Inch Nails, and Tenacious D into my play-list, and I thought to myself, “I wonder if Tenacious D will ever make music again.” I then saw an interesting Facebook post from somebody that they had in fact planned on coming out with a new album in the coming months. However, I didn’t know how soon that would actually be.

And so, ladies and gentlemen, boys and girls, I am very happy to say that The D is back! During the third week of March, Jack Black and Kyle Gass, better known as Tenacious D, released a new single appropriately titled “Rize of the Fenix”, and I must say as a fan from the beginning, it sounds as though they never actually went away.  You can check out a clean version of the song here (audio only).  The longer and uncensored version can be found here.

Before I write anything about the music, I must warn parents with impressionable children, as well as people who are easily offended, that the art work for the single is a certain male body part with the head of a Phoenix and epic wings made of fire. I think that is all I need to say about that. The first minute starts off like a journey, with gentle yet forward guitar strumming and Jack Black rhyming about an assumption that “The D was done”, after their 2006 film “Pick of Destiny” bombed. Then, to brace the listener for an adventurous ride, there is a sense of pride in Black’s voice. It seems to say “you better believe we’re back”, where in the opening lyrics he assures us they haven’t gone anywhere, and also puts critics in their place.

During the second verse, the fast guitar and explosive drums gives ammunition for what’s coming up next. It reminds the listener of Iron Maiden, and you can start to feel the urge to headbang and mosh about. There’s even what sounds like a gunshot before things really take off. The chorus kicks in, and it’s a feel good, rockin’ good time, that is easy to sing along and bob your head violently to.

After the fiery chorus is a quiter verse in a perspective of die-hard fans who may have gotten the band’s name inked somewhere on their bodies. It has a sort of camp-fire feel, and a question of what would have happened if the band really had gone away forever, is asked. They come back with an exciting answer that they aren’t ready to give up the awesome power of music just yet, which, to this RUSH fan, has an appreciative “2112” quality.

Things take a hopeful turn, while they express their aspiration for this “one hit” to bring all the fans, new and old, out again. It seems they also try to persuade us to “get The D tattoo”, and I’m pretty sure we’ll be seeing some folks with awesome ink of this strange and hilarious new artwork of theirs in the coming months.  Or maybe we’ll see something more like this:

Beneath the obvious goofiness of The D’s newest song lies groovy classic rock melodies, heavy 80’s metal guitar, a catchy chorus, a reflective acoustic moment, a strong ending that leaves you anxious for the next single, and a few words starting with “F” – to make things a little more interesting. The song has all the usual qualities you would expect from JB and KG. It’s fun, catchy, humorous, and reflective of their musical influences. One should definitely be able to appreciate their use of sounds from the greats in rock and roll history. Black’s vocals are continuously impressive, ranging from a mighty roar in the chorus, to a mild sing-song voice during the third verse. As always, he is complimented very nicely when Kyle chimes in for back-up vocals.

Fans all over the World Wide Web seem to agree that Tenacious D is back, better, and as powerful as ever. People have expressed all over Youtube and Facebook that they are hoping for a tour, to which I can confirm they have tour dates posted on their website: http://www.tenaciousd.com/events. However, it does not appear that an Arizona date has been set. So for now, we’re all anxiously waiting for the album, which is said to be released on May 15th.