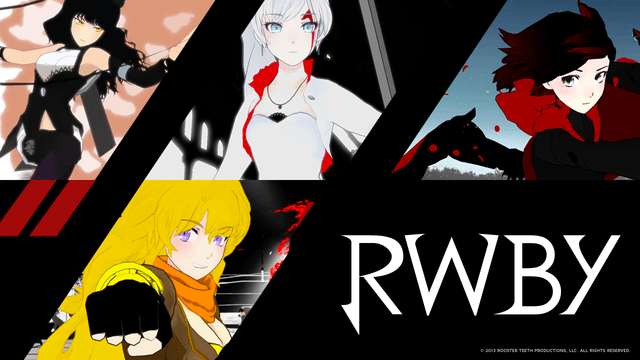 RWBY is the brain-child of Monty Oum, Director of Animation for Rooster Teeth, an anime-styled series about several teams of heroes (Hunters & Huntresses) attending their first year at Beacon Academy. The series is midwifed (written) by Kerry Shawcross & Miles Luna, with Kerry also assisting on directing. As I’ve stated many times over the last year, Monty, Kerry, and Miles are among my favorite people; both in general and for chatting with. Due to this it should come as no surprise that I’m a HUGE fan of RWBY — so much so that I’m listening to the soundtrack as I write this.

A Beacon in the Darkness

If you’ve been a fan of Rooster Teeth since before RWBY’s release, it is likely that you’ll face a bit of shock after the first episode. From a storytelling perspective RWBY is in a different world entirely from Rooster Teeth’s primary series Red vs. Blue; instead adopting a more family-friendly (with subdued graphic violence) vibe, compared to RvB’s more mature humoring style. That’s not to say that the humor is a lesser version of RvB. In fact, the humor is quite similar, which should come as no surprise as Miles Luna does writing duty on both series. Essentially RWBY’s style can be summed up as one part anime, one part Rooster Teeth, one part insanity, and one part old-world fantasy.

At its heart the series is a new way to look at classic fantasy; combining many of the best elements into a cohesive new universe, one that after a single volume we’re still nowhere near immersed enough in. Starting out we’re given multiple seemingly one-dimensional characters (primarily Weiss Schnee and Jaune Arc, played by Kara Eberle and Miles Luna respectively), but as the series flows forth we begin to see new facets of each character. By listening to this seasons “Director’s Commentary Track” you can hear Monty Oum, Kerry Shawcross, and Miles Luna discuss how this was their intent all along. Ultimately starting characters off like this was a bit of a risk, that may have burned some fans, but in the end it pays off. Jaune Arc, more than any other character evolves drastically during the series’ first volume; leading him to become quite the fan favorite in a short amount of time.

Speaking of fan favorites, this show is full of enjoyable characters, each filling different roles. The real star of the show however is the weaponry. At the RWBY panel at this past summer’s Rooster Teeth Expo (where RWBY made its debut) a fan took the mic and asked if there would be any weapons that were not also guns. The answer as of the end of this volume is a definitive “No”. This is not a bad thing in any way, as the weaponry is seriously a thing of beauty. The way they move and function, each design fitting the chosen character’s style perfectly; from Weiss’ magical rapier to Yang’s gauntlets to Pyrrha’s spear Miló, we’re given a series of weaponry that makes sense with the character. Personally I’m a fan of the show’s late entry Sun Wukon and his Gunchaku, a bo-staff mixed with nunchaku and what can only be described as some sort of quad-rifle. Seriously, watch the first volume’s finale and try to explain it any better; I’ll wait here.

No luck? Well, let’s move on then…

The true star of RWBY is the sound design of the series. The music composed and orchestrated by Jeff Williams so perfectly sets the tone for each episode, that it sometimes becomes easy to get lost in the motions of it, forgetting you’re even watching a show. Having the show’s soundtrack anchoring the show works very nicely, giving it a different feel from most other animated series. During battle scenes it flows into the sound effects so perfectly that it is difficult to not be immersed in scenes.

The other star of the show is not surprising, as it is in fact the stars of the show. Team RWBY are perfectly voice-acted, setting each scene with the ability to fall between drama and humor rapidly as needed. Special credit goes to Lindsay Tuggey who so perfectly encapsulates Ruby Rose, that it’s no surprise that Ruby is one of the rare starring characters in a series that is actually enjoyable to watch/listen to. Overall the entire voice cast performs phenomenally, except for one sad issue: I can’t stand Pyrrha (Jen Brown) starting around the mid-point of volume 1. Don’t get me wrong, I love Jen Brown’s usual voice acting work; Carolina being one of my favorite characters in Red vs. Blue. Sadly I just feel like the quality of her scenes with Jaune late in the volume greatly diminished, taking on an almost forced quality to it. Still, it does nothing to diminish the overall enjoyment of the series.

Now that the show review is over, let’s take a few moments to look over what you get with this Blu-ray set. On the disc you’ll get all of the original RWBY trailers, something that Monty Oum has referred to as akin to mini-movies in of themselves. There are two commentary tracks, one featuring director & creator Monty Oum, and writers Kerry Shawcross and Miles Luna; the other featuring the women of RWBY Lindsay Tuggey (Ruby Rose), Kara Eberle (Weiss Schnee), Arryn Zech (Black Belladonna), and Barbara Dunkelman (Yang Xiao Long). Each commentary track is worth a listen, with special honors going to the director/writers commentary which gives some interesting insight into the show’s inception and production, as well as jelly bean flavors. Hearing honest opinions on scenes and jokes about how things didn’t always work the way they intended adds another dimension to the show. Also, listening to Miles Luna’s first viewing of the RWBY volume 1 finale is easily one of the most endearing things I’ve ever heard.

Speaking of that commentary track, it helped me notice one issue with this Blu-ray which was not present in Red vs. Blue Season 11’s Blu-ray offering: the use of episode breaks instead of scenes flowing together. This series was obviously made with different methods, so bridging scenes may have been not within the ‘budget’, but it kind of breaks up the flow of things when you spot the episode breaks in something like this. A minor gripe at best, but something that I still found bothersome on first viewing.

In addition to commentary tracks and trailers, there are features showing off a Behind the Scenes look using interviews with Monty Oum, Kerry Shawcross, Miles Luna, Kathleen Zuelch, and more on the show’s inception and production. There are also looks at the RWBY fan art, cosplaying, and storyboards for the first episode.

End of the Journey…?

Ultimately the RWBY Blu-ray is well worth a purchase for anyone interested in the series, or simply in anime in general. It’s a fun, different take on the genre involving lovable characters and solid voice-acting. You would, and should be saddened if you don’t pick it up. Waiting on a future box-set is also viable, but based on the team’s current plans and series’ rampant popularity, it may be awhile before one of those actually gets released.

As an aside from the above review, I just wanted to inform everyone that the Constantly Calibrating podcast is currently doing a contest over on our Facebook fan page to win RWBY Volume 1 on DVD! Check here for more details!