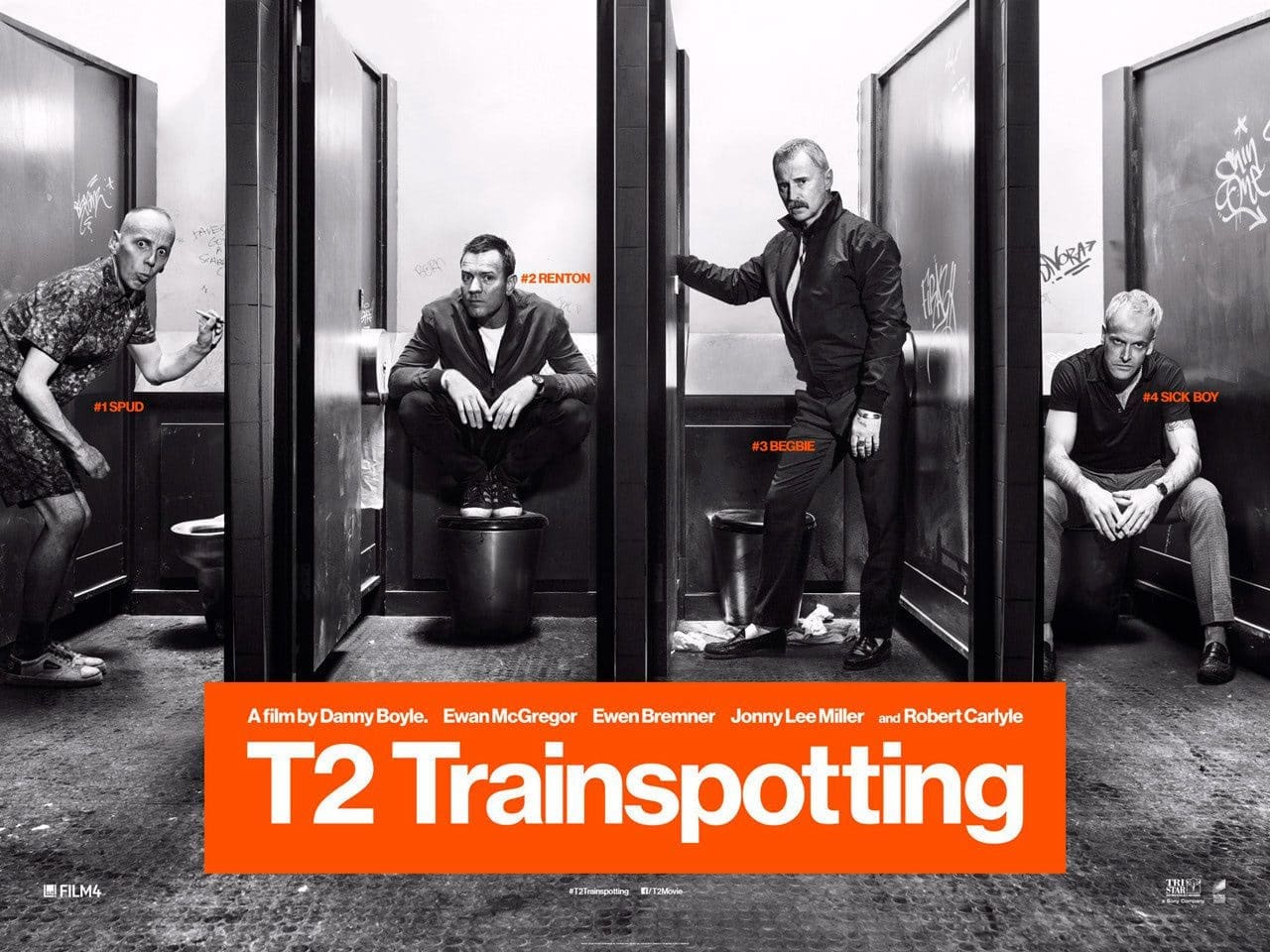 Director Danny Boyle has to be one of the most diverse filmmakers working in the industry today. His work spans genres and cultures well beyond the average Hollywood filmmaker. He’s tackled the horror genre in both the 2002 film 28 Days Later… and the 2007 film Sunshine. He’s covered the lives of real people in the biopics 127 Hours and Steve Jobs.  He’s dealt with ordinary people in extraordinary circumstances in The Beach, Millions, and the 2008 Best Picture winner Slumdog Millionaire. Lastly, he took the subject of drug addiction and turned into a quirky, funny film that rides the line between comedy and drama in all the right ways. Now, twenty years later, he has brought back the entire cast and all of the sensibilities of that film to make a sequel called T2 Trainspotting.

Picking up around 20 years after the events of the previous film, the main four are back but with slight twists in their lives: Renton (Ewan McGregor) has distanced himself from the other three and is trying to live a normal, non-addict lifestyle. Spud (Ewan Bremner) is attempting to kick his habit and get his life on track by going to self-help groups. Simon/ Sick Boy (Jonny Lee Miller) is up to no good by blackmailing wealthy men and owning and running a bar with his girlfriend Veronika (Anjela Nedyalkova). Begbie (Robert Carlyle) is serving a 25-year prison sentence and due to his violent temper, he has just been denied parole yet again. Through a series of wacky events, the four eventually run into each other and Renton is still looked up negatively for stealing the money in the end.

Recently a string of sequels to long dormant properties have been making their way through Hollywood. Dumber and Dumber To, Anchorman 2: The Legend Continues, and Indiana Jones and the Kingdom of the Crystal Skull are just a couple that completely missed the mark in terms of recreating the magic of the previous films. Usually, if a film is successful, a sequel is made right after to help keep public interest as well as to facilitate the actors being able to recreate the same kind of performances.  Most of the time it fails, but in the case of T2 Trainspotting, it seems that Danny Boyle and the entire cast hit the nail right on the head.

The film is absolutely brilliant in all the best ways: Not only does it somewhat stand on its own as a complete story, but it digs even deeper into the events of the first film and explores the relationships between all four men in greater detail. It also keeps that same crazy, absurdist, off-the-wall style and editing that made the original so entertaining to watch. Every single actor gives everything to their role and the end result are performances that make you fall in love with the characters all over again. Even the introduction of the new character, named Veronika, is handled with such care that she feels as if she could have easily been in the previous film.

I don’t have much of anything negative to say about this daring sequel to a much-beloved cult film. My only minor gripe is that it doesn’t go to as crazy of lengths with its visual wonderment as I wish it did. There isn’t any absurd toilet diving-type sequences that leaving a lasting impression. Nevertheless what you do get with T2 Trainspotting is a near perfect sequel that is a fantastic compliment to the original film.

Synopsis: 20 years after the events of the first film, all four guys haphazardly meet up again which results in a crazy new experience.