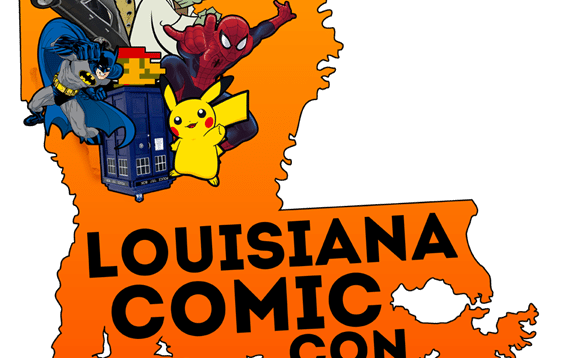 Louisiana Comic Con took Lafayette by a storm, filling local businesses with cosplayers and ecstatic fans from all over the state. The guest list changed a lot from the original advertisement. Both Sean Patrick Flanery and DJ Yella were unable to attend, but then Todd Haberkorn, James C. Leary, and Jennifer Lynn Warren arrived as special guests. Another delightful addition to Lousiana Comic Con this year were the two pizza loving, cowabunga brothers: Michelangelo and Donatello from Teenage Mutant Ninja Turtles! Because of these two amphibian friends, there were more children present this year. The lines were filled with little Annas and Elsas and I was pleasantly surprised by the amount of little Star Wars and DragonBall Z cosplayers. (I saw this little boy dressed as Gohan’s purple outfit from season one. The word “cute” doesn’t give this kid justice.)

The game room (or floor in this case) was one of the best I’ve ever seen. Not only was it fun for ALL ages, one room was focused on board games and cards. Rows of tables were set up with board games such as: Small World, Last Man on Earth, Netrunner, Settlers of Catan, and Rampage. Down the hall there were several PS4s and X Box 1s set up with the latest releases. (Imagine Best Buy or Target where they have the booths set up with the TV and the console hooked up with the games, only arranged arcade style.) It was a seriously amazing set up, with balconies just outside to take a breath and get away from the massive crowds.

Now back to the guests. My main objective was to see Andy Kuhn, artist of the comic series Doctor Who, Samurai Jack, and Teenage Mutant Ninja Turtles. When I approached him and told him I loved his art work and his latest work on Teenage Mutant Ninja Turtles, the poor guy almost seemed surprised. Apparently a lot of “fans” had approached him throughout the day, asking him to sign older Teenage Mutant Ninja Turtles comics that he didn’t illustrate. He was happy to talk for a little while and I was intrigued by how he described drawing the four turtle brothers. They all look alike, especially since the main way to tell them apart is by their weapons of choice and the color of their masks. But his comics are black and white. So he focuses on their stances. “When I’m drawing, I’m the actor as well,” Kuhn told me. “At the studio in Indianapolis, when I would draw a scene, I would also act it out a bit.” He added that this process helped him really understand the characters and know how they would hold themselves.

After speaking with Andy Kuhn, I visited David Della Rocco, who happened to be at the next table. Rocco was full of laughter and happily posed for pictures with his fans who paid for his autograph. He was very similar to his character in Boondock Saints. He was funny and generally a goofy guy. He really respected his fans that cosplayed as him as well.

I then had the honor of interviewing Todd Haberkorn. Not only was he kind and excited to see every single fan (and it was a very, very long line), the staff helping him were very sweet as well. (Friendly staff is what makes Comic Cons work. Remember that, folks.) During Haberkorn’s interview, he remained kind and enthusiastic, despite the fact that he had spent the past three hours doing autographs without a break. I commended him for his energy and individual responses for each fan and his response was truly touching. “I know a lot of fans won’t remember geometry or trigonometry, but they will always remember running into someone they admire. So I try my best to make it a positive experience.” He continued to say that he had a lot of moments that a fan would confide in him that a show he had done had helped them with depression. He said that he tries show those fans extra sensitivity and kindness.

When asked what character he identified with the most, he said Natsu from Fairy Tail with no hesitation. “I got a lot of Natsu in me. I get fired up. I’m loyal. I jump into things without thinking. I’m even a Leo, which is a fire sign.” He then said that lately he has been working on more Fairy Tail and just finished Free! He also has been busy with Monster High and Star Trek Continues, which just premiered that fifth episode. “I’ve been doing a lot of traveling. I’ve been to Australia a lot and I’m going to London next week. I’ve had a crazy schedule for the past…15 years…” he said with a tired laugh.

Before Haberkorn became a famous voice actor, he was a big comic book fan. He said that he

had watched some anime, but at the time didn’t realize that it was considered anime. For example, he said that he watched Vultron and Vampire D. But he reads comic books to this day. Some of his favorites are Batman, Superman, he’s finishing Swamp Thing and is about to read Saga. He also mentioned that he liked Descender and Injustice. “There are just so many comics I want to read, but they come out weekly and it’s hard to keep up.”

During the interview I found out that Haberkorn has a pet peeve. (We all do. Mine is when I hold the door open for someone and they push the door anyway. Ugh.) During hours of signing autographs, lay-overs, taxi rides, Haberkorn has an overload of people asking him for auditions to get into voice acting. “People are so flippant and just ask for auditions. They aren’t willing to work hard. They want to be famous, not voice act.” He continued to say, “It frustrates me because people think voice acting is easy. It’s disrespectful to the people who have gone through years and years of training, paying off student loans and went about getting the job the right way.” I then asked him which job he had done that was the hardest and his answer was not what I was expecting. He said it was recording audiobooks. (Which makes complete sense, right?) “You have to narrate, do character voices, different dialects and you have to do it all in real time.” He then gave an example. He said to imagine a scene with five different people. Three are girls, one has a British accent, the other an Australian accent and the last has a southern accent. He added that it is much more difficult than people realize. “If someone said they would be good at recording audiobooks because they enjoyed reading; that would be like me saying I would be a good surgeon because I know how to cut a steak.” (Like I said, a pet peeve.)

I can honestly say that Louisiana Comic Con was one of the better Comic Con experiences that I have had. It had a fun crowd, a wide variety of booths and cosplays, it was easy to find a friend and the parking wasn’t a nightmare. (Which is more than what can be said for MechaCon in New Orleans, hahaha!) At Louisiana Comic Con, I felt safe and was touched by the sense of comradery at the event. It is always comforting to be surrounded by people who possess the same passions that you do. May we share those same passions next year! See you then.

An Interview with Mike Choi at Phoenix Comicon ’13