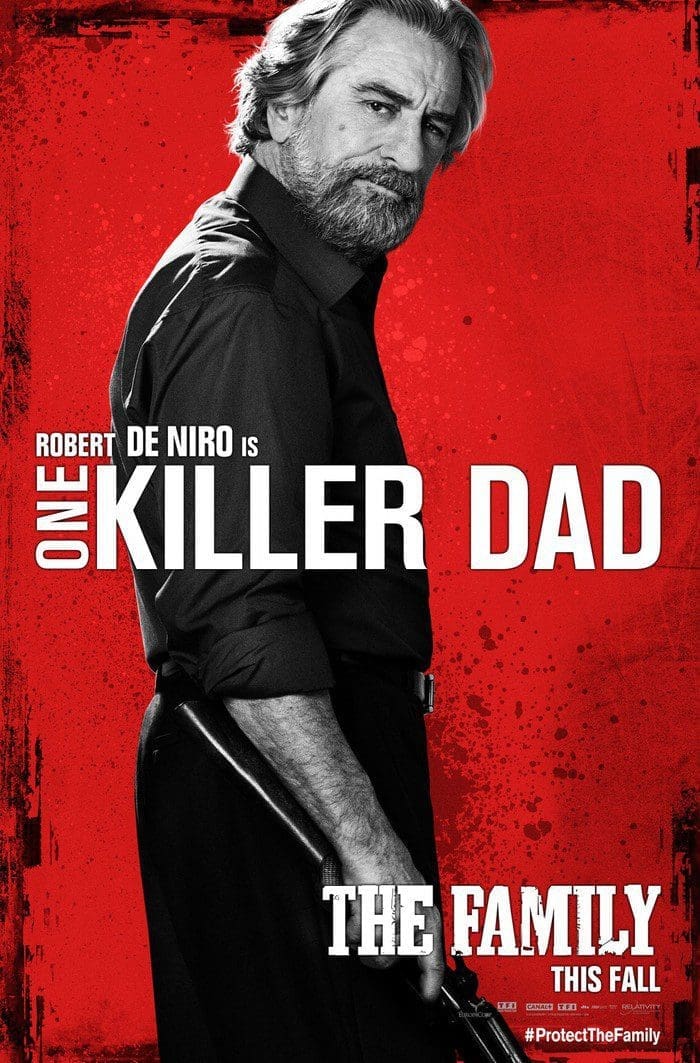 The entire gangster genre of film dates back around one hundred years. From the early start of film, gangster films were all the craze. Just like westerns, from the 1910’s to the 1950’s Hollywood was inundating the public with one gangster picture after another. From the first ever true gangster film entitled The Musketeers of Pig Alley made in 1912 to the 1956 Stanley Kubrick non-linear masterpiece called The Killing, Hollywood was at the top of its game when it came to gangster films. Progressing from the 60’s and into present day, the genre has still hit strides with The Godfather, Scarface, and more recently The Departed, but gangster films have never been the out-and-out blockbusters that they used to be. Piggybacking on the entire genre and infusing it with comedy is the new Luc Besson film called The Family.

Fred Blake (Robert De Niro) and Maggie Blake (Michelle Pfeiffer) are the parents of a family put into the witness protection program. They and their two kids Belle (Dianna Agron) and Warren (John D’Leo) have just been set up in a house in Normandy, France in order to try and elude the former crime family that Fred snitched on. Maggie and the kids are to go about their normal lives and blend in with their new environment. Fred on the other hand is ordered to stay inside to stay hidden from those who may put in his family in danger. Tommy Lee Jones plays Robert Stansfield, a government agent who has been tasked to try and keep the family safe.

The film is not without charm but what it significantly lacks is laughs. Besson is able to convey who the characters are in the film as well as their motivations for doing what they do, but it seems as if he doesn’t know how to make them interact in order to produce humor. The Fred character has flashbacks of his previous mob life with sprinkles of what should be humorous actions intertwined, however all of the jokes that should hit are seen from a mile away and are simply not funny. Fred also daydreams about how he would intentionally hurt someone that does him wrong but yet again the joke is played out before you should laugh. Due to her character’s ties with the mob family, Michelle Pfeiffer tries to speak with a “Jersey girl” accent but unfortunately loses it periodically throughout the film which is quite noticeable. Adding insult to injury, the plot is very generic and played out, and when the ending could possibly be a redeeming factor, it all adds up to nothing more than a flash in the pan.

Even though the humor is missing, charisma is a high point for the film. The two Blake children are much more fleshed out than their parents and aren’t mere two-dimensional shells of kids. Belle is the beautiful girl-next-door type who knows what she wants and isn’t afraid to beat the shit out of someone to get it. Warren is her street smart younger brother who is able to use other people’s flaws to con them into doing what he wants. Both children provide significant roles within the film and both are able to properly show the mob persona embodied at a younger age.

If you look at the film from a completely non-comedic aspect then you may have more fun with it than I did. In addition, if a film that makes you smile but not laugh is a good enough comedy to see then I would say the charm may make up for its lack of a punch line. Nevertheless, to me The Family is a very forgettable comedy that I don’t care to meet again.

Synopsis: A former mob boss and his family go into hiding in order to keep them safe from the gangsters that he ratted on.