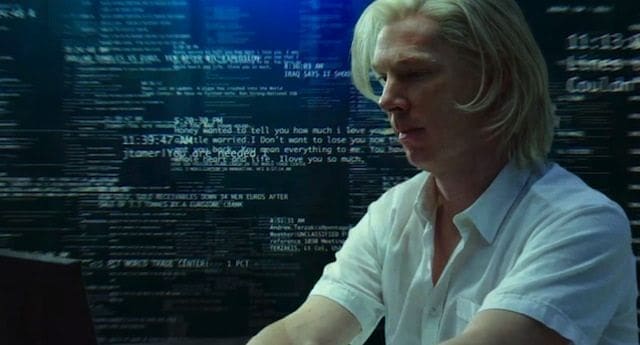 Benedict Cumberbatch is a somewhat unusual name that fits nicely with a somewhat unusual actor. He is not unusual in the sense of being weird or strange, but more in the sense of being able to hone his acting craft and make himself memorable in the process. Even though more recently he has popped up on everyone’s radar, Cumberbatch has been professionally acting for over ten years. My first memory of seeing him on screen would be in the small role of Paul Marshall in the 2007 film Atonement. Since then he has been gaining more and more notoriety with his BBC show Sherlock as well as playing the main villain in Star Trek Into Darkness. One thing leads to another and Director Bill Condon has transitioned off of the final Twilight films and has given the starring role to Cumberbatch in his new film The Fifth Estate.

Benedict Cumberbatch plays the notorious Julian Assange who is the man responsible for the secret-leaking website known as WikiLeaks coming to fruition. The film begins around the time Assange first meets up with Daniel Berg (Daniel Brühl) who is also a technology activist and hacker. By somewhat manipulating Berg, Assange is able to convince him into helping him turn WikiLeaks into a much larger entity. Together they battle against those who wish to shut down their site in order stop WikiLeaks from dispersing highly sensitive and classified documents to the public.

The Fifth Estate is a true first-rate suspense thriller that will have you engaged from enticing beginning to exhilarating end. The film takes on a very Bourne Identity vibe with very quick and poignant dialogue coupled with an almost non-stop pace. Never once throughout the entirety of the film was I bored or did I want it to end sooner than it did. This is a thinking man’s film that encapsulates what WikiLeaks truly is and the lengths that Assage and Berg had to go to in order to let the public know information that they should be aware of.

Going into the film I was anticipating Cumberbatch to steal the film but that really wasn’t the case. Although he gives a stellar performance that should be duly noted, he shares the screen with Brühl who also gives a performance worth mentioning. Cumberbatch plays Assange as a very self-centered and manipulative person whose goals are on the side of good but his path to achieve them edge more on the side of evil. He doesn’t care about the little people just as long as he gets his way. On the other hand, Brühl portrays Berg as a very naive yet intelligent man who wants to do what is right but doesn’t want negative consequences to come from his actions. Throughout the film the two men butt heads on several occasions that lead to some gripping scenes in which both men have the same aspirations in mind but want to go about it in different ways. These scenes exhibit a great sense of tension and are one of the many highlights of the film.

There is much more to like than dislike within the film. My only minor qualm would be certain scenes that aren’t focused on either man and focus rather on what their actions have consequently led to instead. They are definitely necessary for the film but they run a tad too long and don’t hammer their points strong enough. Nevertheless if you are interested in knowing more about WikiLeaks or Julian Assange or simply want to watch a great dramatic thriller, you can’t go wrong with The Fifth Estate.

Synopsis: The story behind the creation of the WikiLeaks entity and what Julian Assange and Daniel Berg had to go through in order to protect it.

“Now You See Me” Movie Review