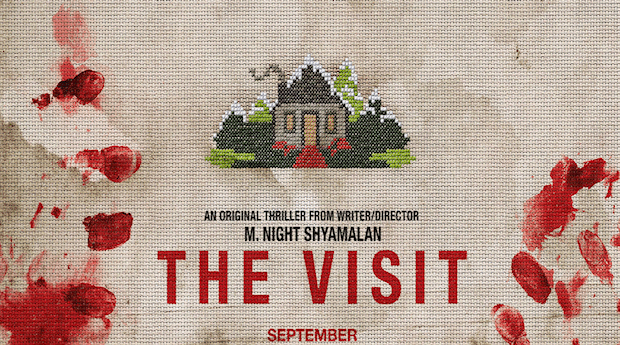 M. Night Shayamalan brings us a new horror/thriller using a found footage approach with The Visit. The general idea of the film is that when you are young, old people can be scary. The found footage approach is interesting as the movie focuses on an aspiring film maker, filming her first trip to her grandparents house. It was fun to see how this method played out in the film. Unfortunately, I found that the “found footage” method was generally jarring and seemed to take away from the content of the film itself, as it always seemed to take center stage. Another aspect the film centers on is isolation. The two children featured in the film are staying with their grandparents at their farm in the middle of nowhere. When things start to get a little strange, the fear is in the fact that they have nowhere to run.

The Visit is about a family, who have seen some relationship troubles and are trying to reconcile the past. The mother in the film (Kathryn Hahn) sends her son Tyler (Ed Oxenbould) and her daughter Becca (Olivia DeJonge) to stay with her parents (Deanna Dunagan and Peter Mcrobbie) on their farm. Things get tense when the grandparents begin to exhibit strange behavior.

Surprise is the name of the game with The Visit, or perhaps a lack there of. I was absolutely surprised, as I was certain I was going into a horror film. I had my popcorn, drink and notepad at the ready. At the very start of the film I was met with an aspiring 8-year-old wannabe rap artist that ripped me out of my tense posture and made me feel nearly insulted with the awful attempt at humor. While it did incite a few uncomfortable chuckles from the audience, after being reintroduce several times it felt old and irritating rather than light-hearted and fun.

The found footage aspect is overused and though I understand what Night was going for here, it took away from the presence of the film and fell quite short. The actors in the movie were absolutely the BEST part of the film. All of the main leads were incredible, but the children actors Olivia Dejonge and Ed Oxenbould take the cake. Despite working with a poor script, they did a wonderful job of sticking with their characters and feeling generally believable with what they had to work with. That being said, what they had to work with wasn’t really that believable at all. The characters themselves felt more forced and contrived than authentic. This is a big deal when the main focus on the film are the two children and their reactions to their environment. More time should have been spent on making the audience care about the characters instead of forcing character traits and insights down our throats via small vignettes.

One thing that drove me to feel cheated was the lack of actual horror in this film. For me the real horror was the attempt at comedy. Though there is one moment from Ed Oxenbould that had me rolling, a moment that I will absolutely not spoil for you here. I will state only that it involves curse words, or lack there of. This film had real potential. The idea that as we grow older, and slowly die our minds began to deteriorate and we lose touch with reality. This Is absolutely horrific. You could lose your beans and stab a loved one, then forget what happened a moment later, only to find your family member dead. That scares me to the core. This aspect is touched on here but falls short as we are bombarded by poor jump scares and shock tactics.

Many people love Night for his big twists. The fact that he takes us on a ride, then pulls the carpet out from under us is a joyful and thought-provoking gimmick that I enjoy time and time again. It’s like trying to unravel a puzzle the whole time you’re watching his movies, until that great climatic moment where you say out loud, “HOLY @#$!” The twist in The Visit is the most obvious of all of his movies. Items and information are intentionally left out or taken away to hide the surprise in the film. This makes it feel forced rather than a free-flowing, more natural surprise. More than likely the audience will guess the twist before it’s presented to you. It would have been better without ever being in the film. Had Night simply played more with the idea of the older generation losing touch, it would have been much more of a horror movie.

The trailer was well done in that it made the movie look scary and was full of trickery. The real twist here was that this is a comedy, not a horror film. In the end, this was a missed opportunity for Night. What could have been a great film was a laughable attempt at goofy humor to keep the audience occupied while the movie progressed to a sloppy ending. The acting was good, but even great actors cannot stop this Ghost Ship from reaching its Final Destination at the bottom of the sea. For die hard M. Night fans, don’t expect anything good to come of The Visit. Go into the movie expecting a comedy and you might, at the very least, be entertained.

Synopsis: A single mother finds that things in her family’s life go very wrong after her two young children visit their grandparents.