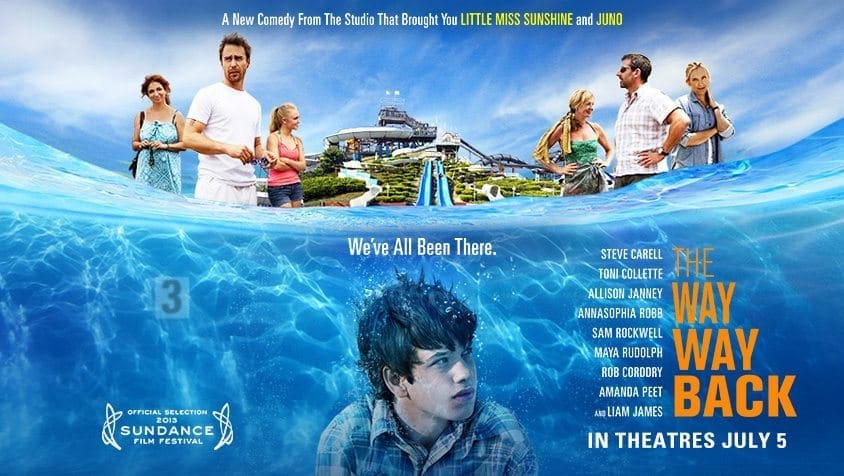 Every year, there is always one summer “independent movie” darling. This year is no exception with the familiar, but charming, funny, and heart-felt, The Way, Way Back. Told in the “now,” with a soft edging of the 1980’s for reminiscent aesthetic, the film begins with Duncan. He sits alone, in the backseat of a vintage olive green station wagon with the kind of depressed look that only a shy, awkward 14-year-old can muster. He’s being berated by his Mother’s new boyfriend, Trent, played by a buff and gruff Steve Carell. Forced to spend the summer at Trent’s summer home, Duncan is clearly scared, frustrated, and out-of-place.

We’ve all been there. That stage of young adolescence where we really don’t know where we belong or what to do with ourselves. That point in life that you feel trapped at family gatherings with family members who, of course, you hate. All you want to do is escape and go…somewhere. But there’s no where to go, or any real direction, yet. And thus is Duncan.

Feeling hounded by his mother’s boyfriend, ignored by his mom, and ostracized by his potential-step-sister, Duncan leaps at every chance of freedom he can get. Which, mostly, comes in the form of a pink girl’s bike that he peddles happily, aimlessly, around town. Until he meets Owen, a man-child in his own right, that manages the local water park, the Water Wizz. The two develop a friendship, with Owen taking Duncan under his wing, giving him a job and providing the vehicle for a life changing summer that empowers him with hope and courage.

Written and directed by the Academy Award winning team of Nat Faxon and Jim Rash (everyone’s favorite Dean from Community), the story is told with humor and poignancy. It weaves a tale of teen angst without being angsty. It parallels how adults and teens are both trying to find their place in the world without settling, and how maybe we can still learn from each other.

In one of my favorite scenes early on, Pac-Man is used as a nice metaphor for relationships and life. Owen, having to ditch mid-game, allows Duncan to step in, but leaves him with the advice, “No pattern off my quarter, you cut your own path.” The point being that while we all have our mentors in life, it is still ultimately up to each of us alone to discover our own true self, but a little coaching never hurts.

Many of the characters in this film are easily lovable. Sam Rockwell’s performance as Owen is hilarious, Rockwell being clearly comfortable in this comedic, laid-back role. Allison Janney pops up as the annoying, alcoholic, next door neighbor Betty, bringing hilarious quips and unspoken knowledge of the reality around her. Rounding out the cast is Toni Collette, Maya Rudolph, Rob Corddry, Amanda Peet, AnnaSophia Robb, and Liam James, who brings a real understated charm to the role of Duncan. Everyone is brilliant, and it leaves the impression that the cast and crew enjoyed collaborating together.

This film is an instant summer classic comprised of mood-inspiring music, an all-too-familiar setting (because we’ve all experienced this transformational summer or soon will,) and clean and concise editing.  Clearly a lot of TLC went into the film’s making and it shows with it’s sensitive charm, fast-paced quips, and tender moments.  The Way, Way Back is easily one of my favorites of the year.

Synopsis: 14-year-old Duncan’s summer vacation with his mother, her overbearing boyfriend, and his daughter. Having a rough time fitting in, Duncan finds an unexpected friend in Owen, manager of the Water Wizz water park.