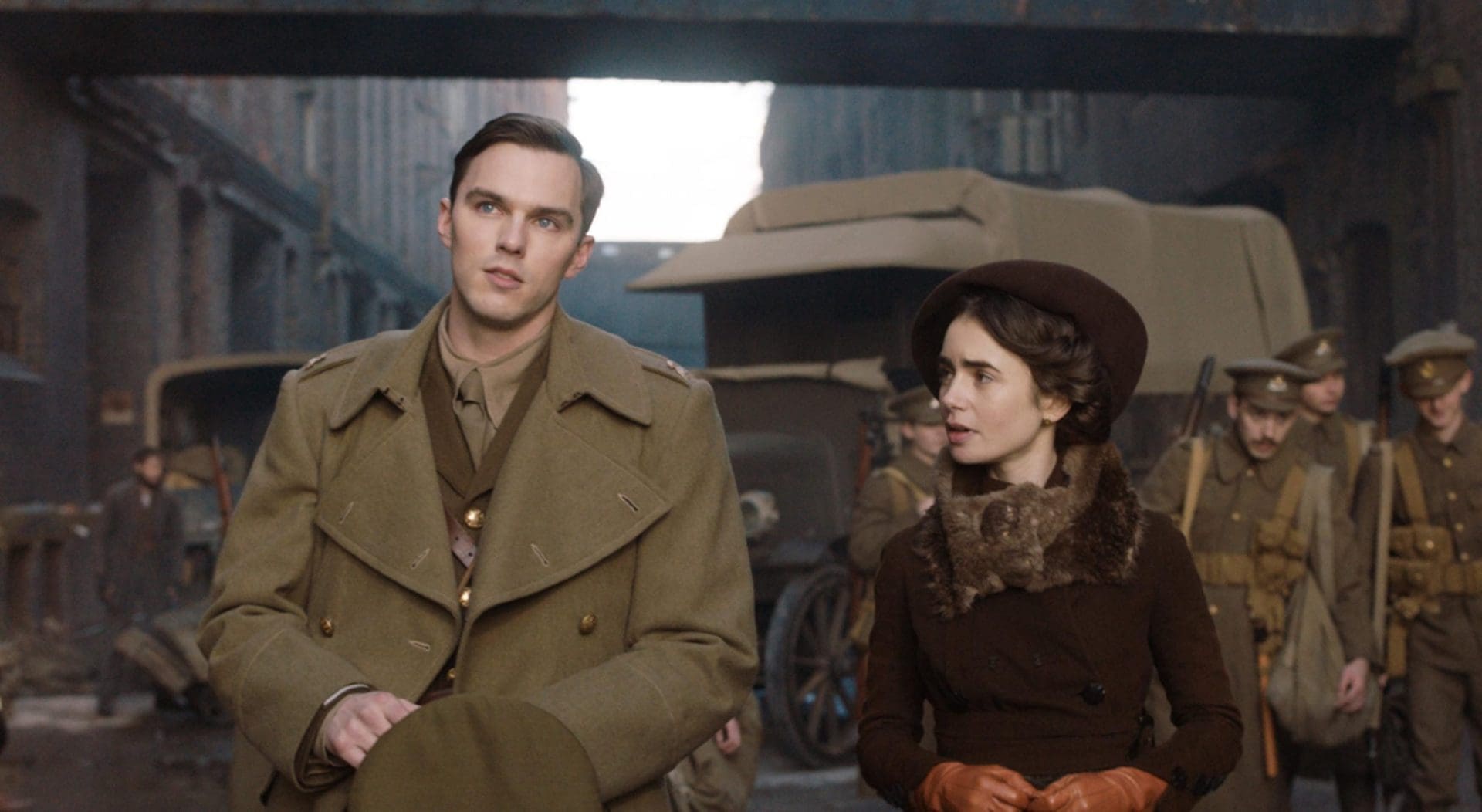 Even though I’ve seen tons of fantasy films, it’s not really a genre that’s high on my list. The focus on archaic technology and out-of-date social norms doesn’t really appeal to my interests. Nevertheless, I can appreciate the ways in which the genre strengthens the art of cinema as a whole. So when it comes to the films based on the work of J. R. R. Tolkien, The Lord of the Rings and The Hobbit trilogies are films that I’ve seen and appreciate but aren’t a huge fan of. I do, however, love the world building that those properties are able to create. From the detailed locations to the use of weird and interesting lore; the worlds are brimming with intrigue and wonder. Director Dome Karukoski is also an admirer of the famous author’s work and has showcased his life in the new film entitled Tolkien.

Tolkien begins in the early years of the life of J. R. R. Tolkien (Nicholas Hoult) but the majority of the plot is split between his time in the trenches of World War I and his years at school before the war occurs. During his adolescence, his mother Mabel passes away which leaves him and his brother orphans. Per her dying request, she enlists the local church to take them in. While under their supervision, Tolkien attempts to fit in amongst the social elite at the new school he now attends. In addition, he befriends a girl named Edith Bratt (Lily Collins) who is also in the care of the church. These segments of his life eventually lead to how he later grows as a person throughout his adult years.

While most biopics are very linear with little to no artistic flair, Tolkien is a welcome deviation. The sections in which he is engulfed in the grime and despair of the war are genuinely disconcerting with fantastical visions encompassing his fragile state. It’s a captivating blend of his life with some of the inspirations for what makes his work seem so fathomable yet unrealistic. On the other side of the coin, the time in which he spends with both his school friends and his love interest are what help to define the characters in his books. They aren’t seen as merely two-dimensional paper cutouts but are instead bursting with an extravagant yet captivating personality.

Aside from the overall tone of the film, the performances that help infuse the tenor are absolutely brilliant. Nicholas Hoult completely stands out as a man on the precipice of greatness who only needs a slight push to achieve his goals. His charisma overwhelms the screen and his subtle yet convincing charm makes his vulnerable moments feel extremely authentic. In addition, Lily Collins plays the part with a whimsy magnetism that makes her character exceptionally likable. As a viewer, you can see why Tolkien would completely fall for her illustrious allure. Together they make a fascinating on-screen couple with an incredible amount of undeniable chemistry.

When I originally approached seeing this film, I knew next to nothing about J. R. R. Tolkien. The only information about his life that was known to me was that he was the British author of The Hobbit and The Lord of the Rings books. This film has completely opened my eyes to his fascinating life and has made me gain a new appreciation for the man. Even though I’m sure parts of his life has been fictionalized in this film, it’s still a captivating and entertaining story that both fans and non-fans will enjoy.

Synopsis: Tolkien explores the formative years of the orphaned author as he finds friendship, love and artistic inspiration among a group of fellow outcasts at school.