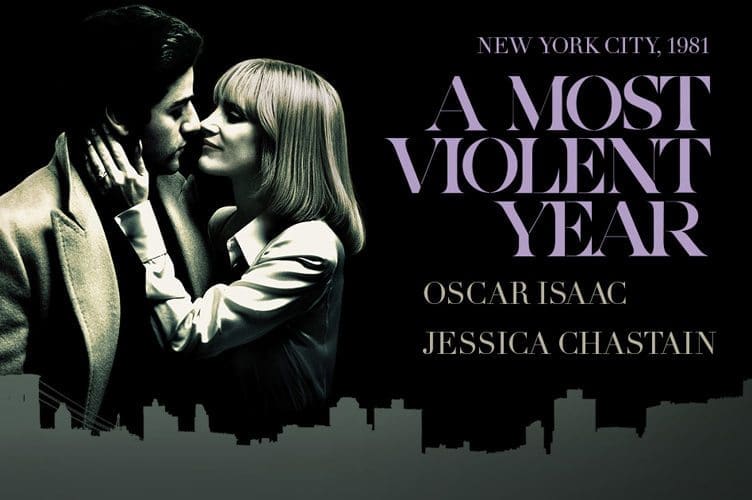 Oscar Isaac was an almost unknown actor until a couple of years ago. He began his acting career in a small, indie film called Illtown in 1996. Six years later he had a small part in the Ice Cube film All About the Benjamins. Flash forward eleven years and eighteen films later and he is starring in the Coen Brothers masterpiece entitled Inside Llewyn Davis. Although he has had major roles in several other films, Inside Llewyn Davis was the first time you could truly appreciate his overall acting range. Now he is demonstrating that range again in J.C. Chandor’s new gritty crime-drama called A Most Violent Year.

The year is 1981 and Abel Morales (Oscar  Isaac) is a hardworking owner of a heating oil business in New York City. He runs the business with his wife Anna (Jessica Chastain) and his friend Andrew Walsh (Albert Brooks). While trying to expand his business, the trucks that carry the oil from place to place begin getting high jacked at an alarming rate. To add insult to injury, Lawrence (David Oyelowo) is a district attorney who is investing Abel and his business on possible corruption charges. Abel must try and figure out who is perpetrating these crimes against him and try and clear his name.

When looking at the film as a whole, the performances from all of the cast are above reproach, but the story unfortunately builds up to an ultimately boring and stale conclusion. Oscar Isaac is at the top of his game and perfectly portrays a man that is torn between doing what is right and doing what is necessary. He demonstrates a phenomenal gravitas that completely sucks you into his character and makes you hang on every single word that he utters. Jessica Chastain also shows her acting chops and exhibits a true toughness never before seen in any of her other roles. She is gritty and unabashed and makes herself known every time she appears onscreen. While the story makes for a very interesting premise, it unfortunately fails to leave any memorable mark due to its lackluster execution. The director’s last film was the Robert Redford drama entitled All is Lost. That film has you on the edge of your seat from the beginning and wraps up everything with a truly memorable ending. A Most Violent Year on the other hand keeps making you think that it’s building to something of a grand scale but continues to fail over and over. Not only that, but the pacing leaves much to be desired. Frequently I found myself incredibly bored and uninterested in how the story was progressing forward.

This film is a character showpiece and nothing more. It tries to make the story interesting but it never seems to achieve even a moderate level of success. The cinematography involved is very well shot but it fails to use that cinematography to aid in the overall narrative. If you’re a fan of Oscar Isaac or Jessica Chastain’s work then A Most Violent Year may appeal to you but unfortunately it’s an instantly forgettable tale.

About A Most Violent Year

Synopsis: In 1981 a man that owns a heating oil business tries to save his business at all costs.