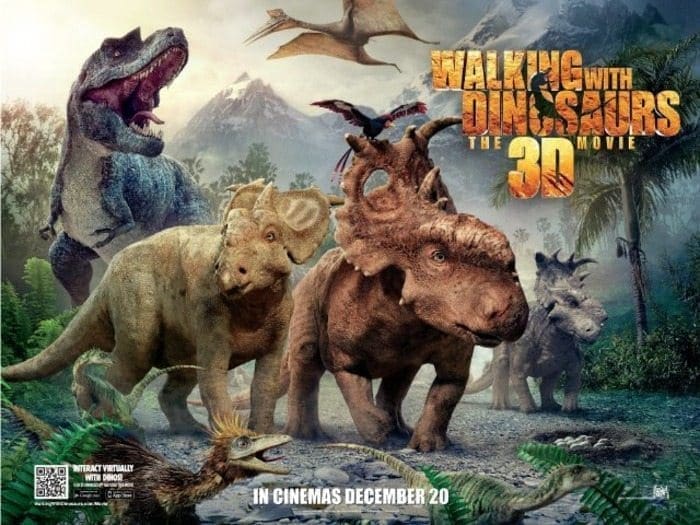 Do you remember The Land Before Time? This film is a lot like that. Absolutely geared at kids, Walking With Dinosaurs puts you in the front row for the show of an era. Specifically, the Late Cretaceous period, about 70 million years ago. This is the story of Patchi, the runt of his litter of Pachyrhinosaurus, his brother, Scowler, and fellow herd member, Juniper. Narrating the film, and also aiding Patchi in his journeys is Alex, an Alexomis bird. Together, the four ancient reptiles must grow, migrate, and face dangerous foes.

If you have kids, you should probably take them to see this movie. There is a bit of violence, but absolutely no blood, every bit the PG rating it got. No foul language, and not even a hint of any type of physical intimacy. This is a kid-friendly film, in every sense of the phrase. And the kids in the theater during the screening seemed to really enjoy it, from 3 years old and up.

Now for what the majority of you really care about: Is it worth seeing if you don’t have kids? In short, my answer would have to be “Only if you really dig 3D CGI and dinosaurs.” Honestly, the story is pretty run-of-the-mill. Patchi has a tough childhood, grows up, becomes a hero. And the area where kid’s movies usually shine, the jokes aimed at the adults being forced to watch it with their kids, is sadly lacking in Walking With Dinosaurs. There were a few chuckle-worthy moments, but for the most part, it’s pretty bland.

The real winner, though, is the CGI. Digital dinos put into real-life filmed backdrops made it a visual treat. There were only a few times where I remembered “Oh, right, CGI.” Most of the film was nearly perfect, visually. Hard to tell, apart from the obvious creatures that are extinct currently, which effects were real or not. Except the lightning. It was done pretty well, but it’s apparently impossible to replicate the real deal!

If you do go to see this, though, be forewarned: The very beginning and the very end of the movie take place in the present, with actual human actors. It was such a flimsy piece of story, and the movie would have actually been better off without it. It hurt me to write that, because Karl Urban is in those scenes, and I absolutely adore him, but I have no idea why he took this gig. Pointless, every second of it.

So, if you have kids, or you love dinosaurs, or you’re really bored and want to see something that looks good in 3D, go see it! If none of those apply to you, you can probably wait until it’s out on Netflix, or something.

For the blah story, for the great graphics, and because of the unnecessary intro/outro, I give Walking With Dinosaurs…

About Walking With Dinosaurs

Synopsis: See and feel what it was like when dinosaurs ruled the Earth, in a story where an underdog dino triumphs to become a hero for the ages.