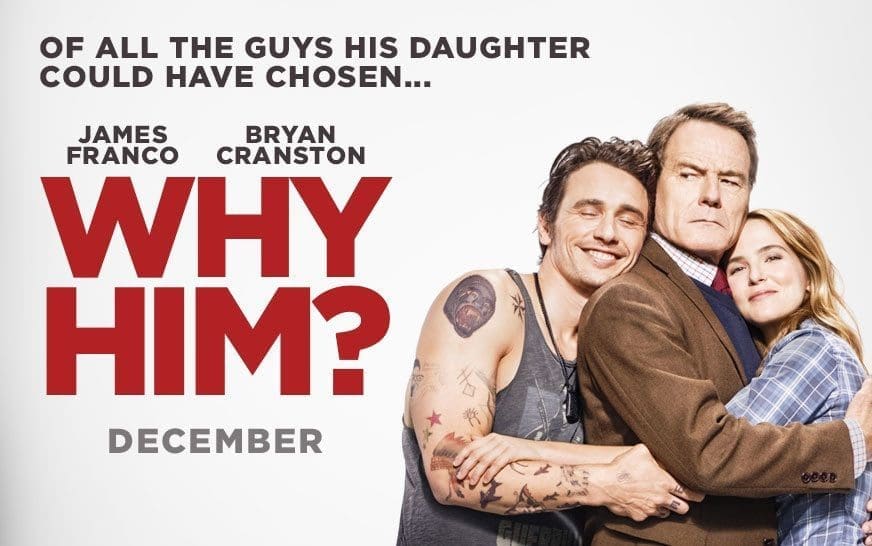 Writer/ Director John Hamburg has been in the business for quite some time now. Born in Manhattan to New York Radio personalities Joan and Morton l. Hamburg, John got a degree in history from Brown University and then attended Tisch School of the Arts at New York University. In 1996 John screened his Short film Tick at the Sundance Film Festival which eventually led to his first feature film entitled Safe Men. From there he would go on to direct episodes of the TV shows Undeclared, New Girl, and The Grinder. John also helped to write the films Zoolander, Meet the Fockers, and Zoolander 2 as well as direct the comedies Along Came Polly and I Love You, Man. His newest creation entitled Why Him?, has John pushing the boundaries of vulgarity yet again.

Ned and Barb Fleming (Bryan Cranston and Megan Mullaly) are the parents of Stephanie and Scotty Fleming (Zoey Deutch and Griffin Gluck). They are a very wholesome and conservative family that gets invited to Stephanie’s boyfriend’s house for the week of Christmas. Knowing relatively nothing about her boyfriend, they accept the invitation. Her boyfriend turns out to be a man named Laird Mayhew (James Franco), a free-spirited multimillionaire game developer who is unabashedly honest and charming. Soon after meeting, Laird tells Ned that he plans to ask Stephanie to marry him and asks for his blessing. Laird’s crazy lifestyle clashes with Ned’s ideals and the two are at odds with one another if the proposal will ever happen.

What could have been a very dry and humorless film turned out to be on the funniest films I’ve seen all year. For starters, the concept is very by the books: ultra conservative family meets the boyfriend/girlfriend of their son/daughter who is a bit wacky. However Director John Hamburg was able to take that standard trope and inject a lot of zany, over-the-top humor due to James Franco’s character being extremely wealthy. Laird has his own personal chef that makes crazy dishes, his own personal servant that attacks him at random times to ensure that he can defend himself, and a state-of-the-art house that has a Siri-like voice that can help you out whenever you are in need.

The pairing of Cranston and Franco couldn’t be better. Cranston is fantastic at playing a man who is set in his ways and Franco always has that dumb yet charming stoner grin on his face all the time. Due to their ethics being completely opposed of one another, the way in which Laird is always trying to impress Ned always ends in some of the best comedic moments. One such instance involves the two men going out in search of a Christmas tree. Ned wants to purchase a standard sized tree while Laird ends up convincing Ned to get one that’s at least twice as big. Needless to say, the tree they find doesn’t fit on the top of Laird’s compact car and comedy ensues.

While I thoroughly enjoyed the majority of the film, the gross-out humor and the length of certain scenes went on for a tad longer than I wanted. It’s a small gripe but it’s an aspect that I feel should be addressed. Nevertheless, if you are interested in a Christmas comedy that will make you laugh until you cry, Why Him? is a film that you will definitely want to check out.

Synopsis: A conservative father faces off with his daughter’s wealthy, free-spirited boyfriend after he asks for his blessing.