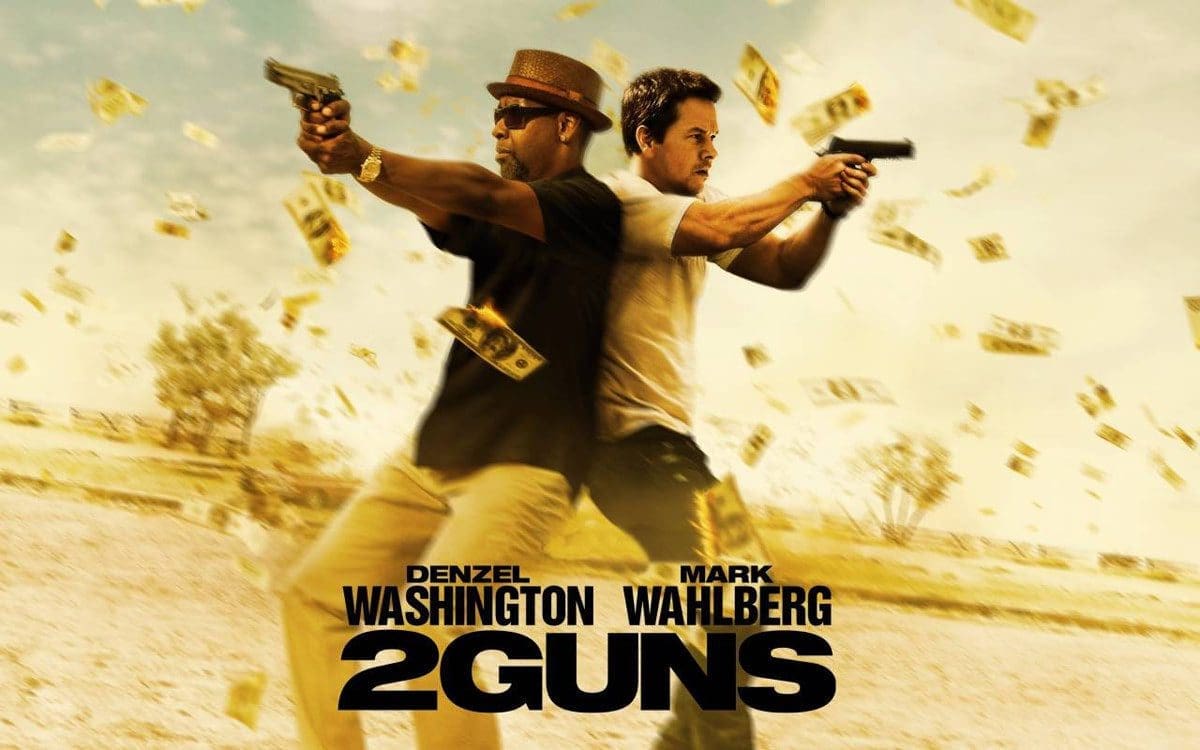 “Buddy team-up” films have been around for some time now. The pairing of two characters of opposite personalities might seem like a recipe for disaster in real life, but in film it’s more of a formula for a fun back-and-forth type of relationship. Some films like Lethal Weapon, Kiss Kiss Bang Bang, 21 Jump Street, and The Heat are able to use the genre in incredibly entertaining ways. Other films such as Hollywood Homicide, Righteous Kill, Cop Out, and Wild Wild West simply leave a bad taste in your mouth. 2 Guns is the latest addition to the ever increasing genre of “buddy team-up” films that is directed by Baltasar Kormakur of more recent Contraband fame.

The film stars Denzel Washington and Mark Wahlberg as ‘Bobby’ and ‘Stig’; one is a DEA agent the other is a naval intelligence officer. The film begins with both men walking into an old-timey diner talking about robbing the bank across the street. After a lengthy back and forth conversation that includes great comedic elements, they decide to burn down the diner for unknown reasons at that time. Flashback to a week before and we see both men rolling into a drug cartel’s compound in an attempt to trade money for cocaine. After dealing with the cartel, both men separately meet up with their work contacts and discuss a plan to frame the other man (at this point Bobby and Stig don’t know what the other’s profession really is). Even though I’d love to go into more detail, that’s the framework for the plot and it’s much more complicated that I expected it to be.

Bar none, 2 Guns is what Red 2 should have been. This film is crass, it’s both dramatic and silly at times, and it’s an absolute joy to watch. Being Washington’s first true comedic role onscreen I can whole-heartily say that he nailed it magnificently. His character is both charming and comical but he never steps over the line into the territory of being stupid-funny. Wahlberg on the other hand is able to pull off a similar performance to the one he did in Ted and it fits nicely within the constraints of the film. He is definitely the Riggs portion of the Lethal Weapon duo with the ability to push Washington’s buttons in all the right ways. Both actors have a fantastic onscreen chemistry that feels very genuine and never forced. They perform in a way that the characters feel like they have been friends since childhood with all of the emotional baggage that they’d be carrying around if it were true.

Other than the stand-out performances from Washington and Wahlburg, 2 Guns’ supporting cast is also immensely fleshed-out. Bill Paxton, James Marsden, and Edward James Olmos are the main antagonists of the film and each one of them portrays their characters far from the forgettable villains as of films of late. Paxton is the no-nonsense southern CIA agent with an affinity for Russian roulette. Marsden is the uptight naval officer who hates loose ends and will get the job done himself if others can’t. Olmos looks like the stereotypical head of a Mexican cartel but he has a few fun-loving traits that set him apart. Altogether, the entire cast and how they perform their roles is what elevates 2 Guns to be a much more memorable film.

Although the film has a lot of things going for it, I only have one minor qualm that I must address. Due to the plot being so complicated, at times it was hard for me to follow the exact motivation for each character. Some characters do things that don’t make sense at first but looking back on the film as a whole; the puzzle pieces for each character begin to link together. It’s definitely not a major drawback but it’s one that I felt was worth mentioning. After all is said and done, I thoroughly loved 2 Guns and it’s a film that you won’t want to shoot yourself after watching.

Synopsis: A DEA agent and a naval intelligence officer must team-up to find out who framed them in a bank robbery gone awry.

“Birdman or (The Unexpected Virtue of Ignorance)” Movie Review

“The Disappearance of Eleanor Rigby: Them” Movie Review