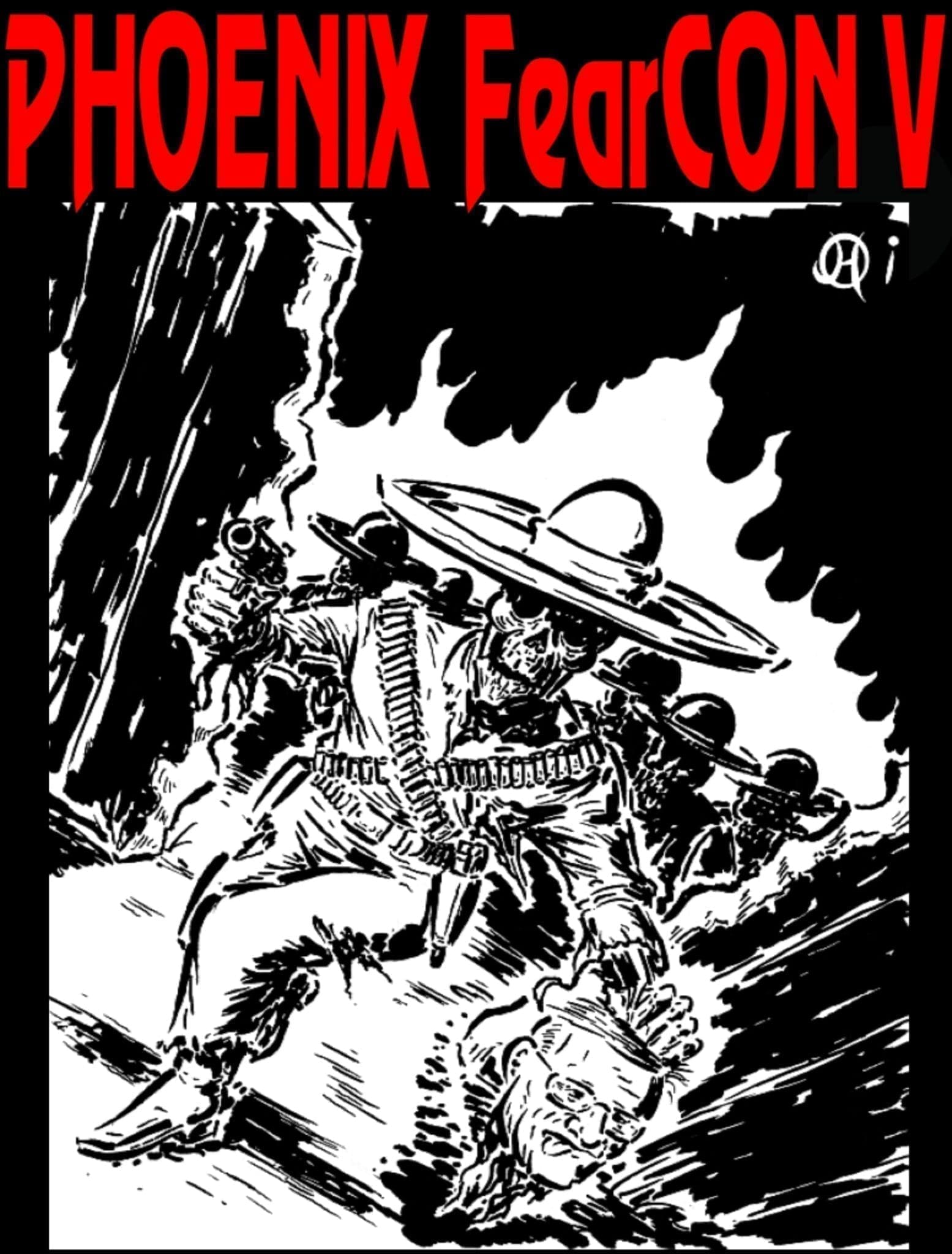 Scottsdale, AZ – Phoenix FearCon V occurred at the Ultra Star Cinemas in Scottsdale this Saturday, bringing terror and dismay to this otherwise ordinary suburb. The FearCon staff pulled out all of the stops to provide a solid day of entertainment to horror fans from around the valley and beyond. The name “FearCon” is a bit of a misnomer; this was more of a film festival with a few con elements than a full convention. The centerpieces of the event were the screenings: 4 full length features and 10 short films, many never before screened in Arizona. In addition to the movies, there was a second theater devoted to other programming, everything from a zombie fashion show to a scream contest to a rock concert. Outside the theaters, the halls were lined with vendors, with so many displays that they spilled out into the parking lot. Of course, because this is a Phoenix con, the costumers were out in force, and you couldn’t turn around without bumping into a zombie.

The vendors were a mixture of retailers, artists, and actors, with a couple of oddities that I hadn’t seen at a convention before. The two celebrity guests of the Con, actors Fred Williamson and Tiffany Shepis, had large tables in the middle of the vendors area, where they signed autographs and chatted with fans. Several local artisans had booths selling their wares, everything from horror-themed cupcakes to steampunk pumpkins to sketches of attendees as a zombie. A few local webseries had booths to promote their upcoming projects. There was also a guy with an owl, who would let you take pictures with the bird, and a petting zoo, where you could pet snakes, cockroaches, and other creepy crawlies for $1.

The presentations covered several aspects of the horror genre. It started off with local favorites Dr Diabolic and Nadia Neuroleptic, who officiated a zombie groan contest and fended off an attack by vegetarian zombies before screening the classic Night of the Living Dead. Other presentations included a zombie runway fashion show, a performance by local geeky burlesque troupe Provocatease, and a lecture by the folk from Empress Road Pictures.

The main attraction of the event were the film screenings, and this is where I spent most of my time. The films spanned the horror gamut, from psychos to monsters to zombies. Some quick summaries of the highlights:

Whom God Helps – A couple are returning to their car after a party, but their quarreling escalates to violence due to the meddling of the archangel of death.

Vuelta al Sueno – A Spanish animated short about a child’s dreams of his overprotective mother.

Velvet Road – A short film about zombies set in the racially charged South of the 1960s.

I Want to Be Tom Savini – In my opinion, this was the highlight of the con.  This charming documentary short chronicled the filmmaker’s attempts to overcome her fear and leave her hometown for the first time, to travel to Hollywood and meet her idol, effects master Tom Savini. The filmmaker was on hand to do a brief Q&A, and she ended up winning the award for Best Short Film.

The Holding – This feature film revolved around a single mom and her daughters trying to keep their farm in rural England from being foreclosed. When a mysterious drifter appears to help them out, strange events begin to happen, and long-buried secrets are unearthed. I found this film to be a little slow, and I have a problem with the whole “Mysterious drifter” premise; in the 21st century, who let’s a stranger into their house?

The House With 100 Eyes – This feature film was a mixture of gore and dark comedy, centered around a psychopathic married couple who try to elevate the art of the snuff film with the first triple-murder on film, complete with DVD extras like behind-the-scenes footage and director’s commentary. While not for the weak, this film was fun, and ended up winning the award for Best Feature Film.
All in all, this was a great event, with lots to see and to do.  If you are a horror fan, I would definitely recommend attending next year.

A Look At PHOENIX FEARCON 2014