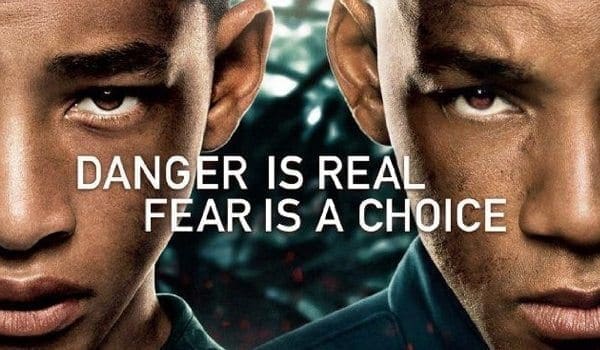 And the latest Will Smith movie brings with it an overwhelming sense of “…that’s it?”

An opening voice-over by Little-Smith sets the scene of After Earth for us: 1000 years prior, we destroyed the planet (cue footage of pollution, fires and floods), and all humans had to leave. But, wait, actually only 1,250,000 were able to leave in gigantic ships that weren’t gigantic enough. But, wait again, because we sucked pretty bad at predicting the end of the world, so only 750,000 actually made it off the planet. So that scant number found a new planet that they called Nova Prime, and home. Except someone else wasn’t too happy about it, so they created gigantic monsters to kill them. Monsters that are blind, but can smell fear. They find the humans that way, because really, who wouldn’t fill their pants with terror-pee when faced with a gigantic alien-monster bred specifically to kill you and impale your corpse on a tree? We fought them, blah blah blah, Will Smith figured out how to not be afraid, so they couldn’t track him, and we won the war? I guess? I dunno, really short intro, and hard to understand, but I’ll touch on that in a bit.

So now there’s Little-Smith and Big-Smith, and they’re on a spaceship, transporting troops and one of those deathy aliens, because hey, THAT’S SMART, RIGHT? Space storm, wormhole (I thought for a moment I was watching an episode of Sliders!), and UH OH! Crash-landing onto Earth is their only option, because somehow after the ship getting damaged in that one-in-a-million space tsunami, the one-in-a-million chance of them ending up right next to Earth happened, too. And supposedly Earth is a “Class 1 Quarantine Planet” except not really. So, crashy crashy, people die, all except Little and Big-Smith. Big is injured, badly, so he sends Little out to find the other part of the spaceship (which actually looks kinda cool, like a space-manta-ray, before the crashing, that is) which has the other, hopefully unbroken, emergency beacon, since theirs is kaput. 100km trek (62ish miles to us Americans), one-way, and the 13 year old gets to do it. Woohoo.

So, yeah… Let me say that I’ve never been a big Shyamalan fan, but I’ve always been a huge Will Smith fan. I’ll admit that I cried like a baby during The Pursuit of Happyness (and only 1/4 of the crying was due to the misspelling in the title), and I cried just as hard in I Am Legend because when Will Smith cries, I cry, apparently. With that being said, I was actually really disappointed with After Earth. It just didn’t ever really grab me, logically or emotionally. Big’s performance as career-military-man General Cypher Raige was, I felt, really limiting. And Little’s turn as Kitai Raige was teenagerly-awkward. His best moments were when he was moving, quickly, and not really acting. The script was pretty flat, with just a couple cute one-liners, seemingly thrown in at the in last minute to try and help the utterly predictable story-line. I kid you not, if you are at all surprised by more than one thing in the entire movie, I’d be shocked. I don’t spend my life watching movies and nothing else, but really? A coming-of-age story set in a “life or death” situation, and the kid grows up and gets his s#*t together at the last possible minute? Yeah, because that’s original. At least give me something really intriguing, like a deep character, or even really cool surroundings. Seriously, for a planet where “everything has evolved to kill humans,” I didn’t really see anything actively trying to kill any human, at all. Stupidity did most of it, and heck, one of the animals is actually nice! Don’t ask me how but apparently that’s how Earth: 3025AD works.

Oh, I do have to mention here what I said I’d mention at some point. The opening narration was hard to understand, because apparently in the future, everyone talks like they’re from New Zealand, England, and Alabama, simultaneously. I mean, really? I know the film isn’t called “After Earf” (much to my chagrin; I freakin’ LOVE Independence Day) but the phony accents only further strip away any sort of connection we might have built with Big and Little.

The soundtrack was forgettable. Really. I can’t even remember any of the music, except one part that I thought kinda sounded like something from Star Trek for a second, and then it didn’t anymore. Shyamalan (or, as I like to call him: Shyamalamadingdong) seems like he took a vacation during all the filming, again referencing the poor performances. And the cinematography was pretty lacking, as well. CGI was apparent in a sore-thumb kinda way, and the whole movie looks plain. Nothing really exotic in the 1000 years since humans left earth. Don’t yell at me, sciencey folks, I know stuff wouldn’t get crazy in only 1000 years, but it’s a movie, and I was hoping for more!

I could go on about this movie for a lot longer, but I won’t. If you’ve got any questions, though, let me know!

If you do go see this film, I suggest reading this next statement a few times: I don’t care about an intriguing story-line, three-dimensional characters, or common sense. I just want to be mindlessly entertained for less than two hours. Repeat the mantra and it should help. Or just go for the popcorn. Whichever.

For the basically-boring…everything, except the saving grace which was the final fight scene (the only fun part, I think), I give After Earth…

Synopsis: A crash landing leaves Kitai Raige and his father Cypher stranded on Earth, 1,000 years after events forced humanity’s escape. With Cypher injured, Kitai must embark on a perilous journey to signal for help.