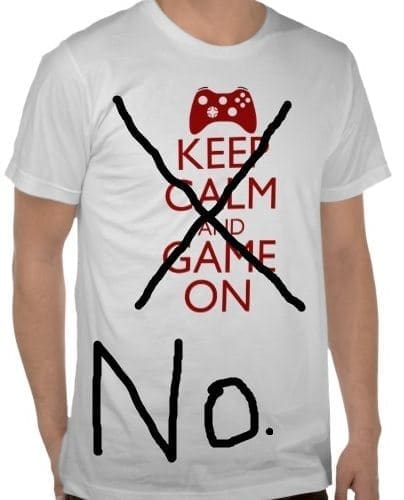 11. Meme shirts – Generally, the joke has already been done to death by the time it shows up on a shirt. Stay Calm and come up with original content. 10. Shirtless costumes – This is an equality issue; either women get to expose their nipples, or men don’t. I’m happy with either result.

9. Props bigger than the holder – Disneyland has the right idea: You must be taller than this sword to carry this sword.

8. Not knowing when to end a conversation – I have started referring to people that do this as “Facehuggers”, as in “I missed a panel because a couple of Facehuggers were trying to recruit me into the SCA.”

7. Doing funny voices over the PA – The sound system in the exhibitor’s hall isn’t very good, there’s a lot of ambient noise, and we’re not really listening to you anyways, so your attempts at jokey voices just sound like Charlie Brown’s teacher.

6. Costume Mooseknuckle – (For the uninformed, Mooseknuckle is the male equivalent of cameltoe) We like to mock it, but there is a reason so many superheroes wear their boxers on the outside.

5. Taking up space in the aisles – The convention floor can get crowded during peak hours, maybe you should find someplace a little more secluded for your singalong.

4. Overly aggressive vendors – If I want to shop at your booth, I will shop at your booth. Do not yell at me or step in front of me, and if you value your various extremities, DO NOT GRAB ME. I may not look that intimidating, but I will go Tasmanian Devil all over your worthless product.

2. Bad hygiene – Instead of checking bags at the door, security should be doing environmental tests on everyone that walks by and denying entry to anyone who resembles a walking compost heap

1. Costumes that I don’t recognize – Hit me up on Twitter to get pre-approval before venturing out to the convention