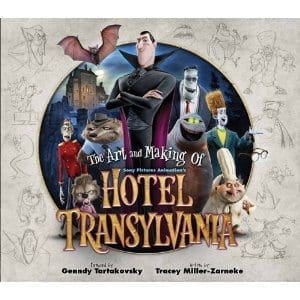 Just because a book is put together as a promotional tie-in for a movie doesn’t mean that it’s a bad book.

The book banks on visuals like stills from the final movie, concept sketches, and other development artwork. The written descriptions are short, thin, and not terribly insightful. But the visuals are often interesting enough to make up for it. You can learn a lot from some of the earlier versions and concept art and it’s very interesting to see how the characters evolved from various concept sketches. There’s an early version of Dracula that looks suspiciously like Mitt Romney.

The book is mostly put together for people who really got a kick out of the movie and students of film and CGI. In the case of the latter, the film is more like a case study than a how-to. Unlike the finished film, you get to see several different versions of characters, sometimes in radically different styles. The little bit of written information does have some information about how the ideas changed, and some of the visuals, in vague, general terms. It won’t teach you how to master Maya, but it will give you design pointers.

The book is great for a tiny niche. If you’re not an animation buff or don’t have an intense interest in this particular movie, there’s not much this book can offer beyond pretty pictures.

Expanding the “Star Wars” Universe One Book at a Time