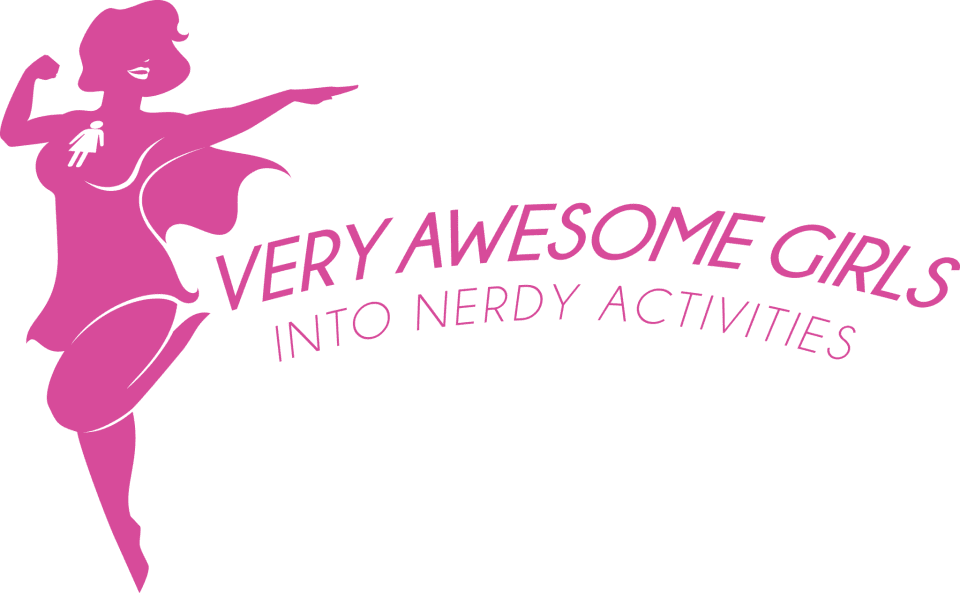 Some days, its hard being a geek and girly crafter. Your parents are confused by the Portal box you made. Your grandma is puzzled by the Jayne Hat you knitted. And then there’s the people at the office who eat your Cthulhu shaped cookies but just don’t really understand why. Sometimes, it’s easy to feel like the only geeky girls and crafters out there are random faces online. But fear not! For local fun and geekiness is just around the corner.

Very Awesome Girls Into Nerdy Activities is a community based group that focuses on service, creativity, and having fun. While their primary focus to raise awareness of girls in the geek community, they also create fun crafts and activities to spread the love. A while back, I was fortunate to interview Blythe Feiring, the current president of the Phoenix chapter. After a debacle of finding a place to meet, we settled down on the patio of a Starbucks and we dished about charity work, crafts, and the growing awareness of harassment in cosplay.

Blythe: Very Awesome Girls Into Nerdy Activities was originally conceived as a community group where women of all colors and most ages (if you are over 18) could come together and share their love of nerdy, geeky, and pop culture things. From there, it evolved into something that we can show to people that women love to do these things and we present ourselves to the public in a very good way through doing community service work and charity fundraisers. Blythe: The charity fundraising that we do is a little more complicated because we don’t go out and ask people for money. We will create things (geek crafts) to sell and then use that money to gift to charitable organizations.

Blythe: The first thing we started doing was perler crafts. They are really easy to start out with and you can basically imitate any logo or design idea pretty inexpensively. That’s big if you are going to be selling them and not expecting any profit. We also do Mod Podge crafts. Its paper crafting with Mod Podge and we use comic books. Several comic book stores have donated comics for us to use. Its been really helpful because comic books – even in the bargain bins – are usually 50 cents to a dollar so it adds up quickly. Also we have a bunch of knitters and crocheters who have made some really cool hats and scarves. One of the girls in the group does a type of Japanese crochet and makes little plushies that are so cute. She’s made a bunch of small things like Pokeballs and she made a massive Totorro (Pictured above on the table) that was about ten inches tall and so fluffy. We sold it within an hour at free comic book day.  Some other crafts we’ve tried are jewelry. One of the girls has a Dremel and drills holes into gaming dice to make earrings and pendants. We want to start making more hair pieces, headbands, and bows.

We really want to branch out but it’s hard when materials cost money. But people really love our stuff and want to pick out their own thing.

Blythe: A couple of months ago was the Back to School Batman Celebration. It was originally envisioned as a really small thing we were going to do at Samurai Comics but the more people heard about it, the more they wanted to join it and support us. People got the word around that we were looking for back to school donations and so it kind of exploded into this huge event that we were able to pull off very well.

The purpose of the event was to collect much-needed back to school items for the Children’s First Academy which is a school for homeless and impoverish children. They have a couple of different campuses in Phoenix but the campus we were donating to was the main campus in Tempe.

The event ended up being really successful. We had about two SUV’s full of actual donations and then we raised a little over one thousand dollars at the event itself.

Blythe:  We went to Costco to get supplies with a group that was helping us – Project Hero. They are all cosplayers, so we had Batman, Bat Woman, Nightwing, and a Cat Woman all come to the event. Afterward, they came with us to Costco to buy supplies (for the school) while in costume.

We had to get permission beforehand from Costco management. I think they had to talk to the upper levels because they did not want masked people running around their store. Even if it was Batman.

Blythe: It was incredibly successful and we plan on doing it again next year, probably around the same time. The reason we chose Batman as our theme is because it’s the 75th anniversary of Batman comics, so it was also a “Happy Birthday Batman”. Next year is the 75th Anniversary of the Joker so it’s going to be a villain theme. Project Hero is already on board – they’ve been looking for an excuse to make villain costumes.

Blythe: If I had to choose something for us because we don’t have anything official, I would say that inclusiveness and acceptance are the two big things that we go by. We support people like cosplayers that cosplay out of their body size or out of the color of their character, or gender; also people who want to be original, transgender, the LGBT community, anything. For our club all you have to do is identify as female, but we will support people no matter what.

A lot of the girls in our club have had to deal with bullying in the past. You get shut down for being a girl who is interested in like, computer gaming. So breaking those barriers and accepting people who want to be part of a community, and accepting them for who they are and not what people think they should be – that’s our main goal. Acceptance and inclusiveness is our big thing.

Blythe: I think its great that people are starting to recognize it and combat it at every level. You get worn down, things that you see, things that you hear. I don’t want to have to mute my XBox gameplay because of the raging, homophobic, and horrible, sexist things I hear. I appreciate it when people combat against that. It’s hard, because you just have to keep chipping away and you must have more stamina than the people who hate you.

It’s really easy to tear people down, and the people who do that – online, in person, over your console – they have the easy part.. It’s easy telling people they suck or making derogatory or sexist comments. The hard part is taking that hit and coming back the next day and showing them up.

We want the world to be a good place for girls and boys to grow up in and not have to settle with societies’ expectations of what girls and boys are allowed to do.

Blythe: Joining is easy; just email us at veryawesomegirlsphx@gmail.com. Tell us you are interested and I’ll send you this really incredibly difficult application. It’s seriously hard because it asks you what your favorite things are and I know I have a hard time picking.

If you just want to contribute though, for example, you can inquire through our Facebook page. We have people who make crafts for us. They aren’t really interested in selling them for whatever reason, so they donate them to us to sell for charity. We do like, consignment crafts. Some people have a hard time letting go of what they made but they don’t want to go through the trouble of trying to sell it, but they also don’t want to just throw it away. At least this way they know we are raising money with their crafts for something good, even if we don’t know which charity we are raising money for just yet.

Blythe: Here’s my problem with Harry Potter, I think the philosophy of the wand being the primary weapon is a bad philosophy. There’s no limitations, or very few, but you can make yourself a sandwich out of thin air. Your life is so easy if you are a wizard or a witch.

Blythe:  We will be at Comic and Media Expo and Library Con, (this weekend) The month of November has been blocked out for all community service events. So we won’t be raising any money, we will just be doing community service around the Valley.

We also have our regular meetings and our book club that meets once a month. We also have a table top gaming group that meets as well. Nothing terribly serious, like Munchkin, but we do play other games. We have about 35 members total but at any given meeting it’s about 15 members. People have busy lives but I still see everyone in the club at least once a month.

Blythe:  I just really want to stress that not only is our group going out to do good things but to also make a good impression. It’s hard for people to fully accept the existence of nerdy women; Especially when we hide behind our weird literature, and computer screens, and video games. Being visible is the best way to shut down “Haters.” So we are trying to make an impact for future women so they don’t have to grown up hiding the things that they like.

Check out Very Awesome Girls Booth this weekend at the Comic and Media Expo. Also this weekend, they will be doing panels on Game of Thrones and science projects over at  LibraryCon. For more information on their group check out their facebook page. Big thanks to Blythe for taking the time to talk and for being patient with me.