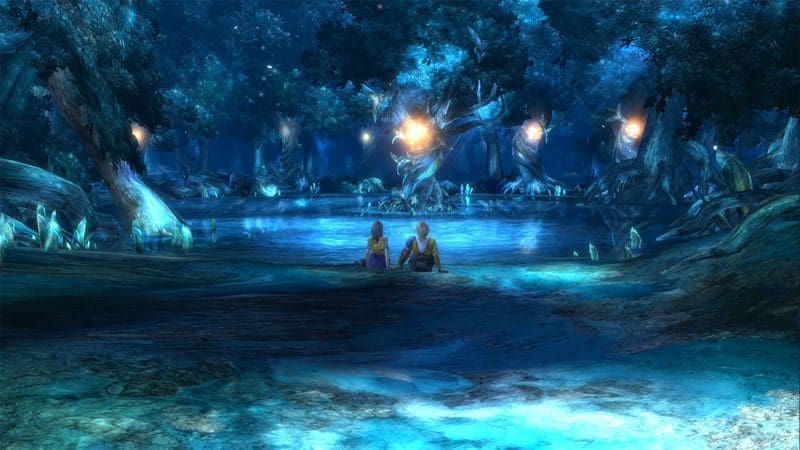 Ahh, how Square-Enix seems to be doing everything they can to avoid making a high-definition re-release of Final Fantasy VII their resident audience seems to be all but screaming for. Their latest effort in recouping their dwindling fans is the Final Fantasy X/X-2 HD remaster for PS3 and PS Vita respectively, which is actually a halfway decent move for them as of late. However, did the good folks at Square-Enix give their best effort with this high-def spin on the best-selling PS2 classic, or just throw it out there and hope the nostalgia and trophies would be enough to merit a $40 price tag?

This being a remaster of an older game, one would expect just a few new things to freshen up the whole experience. FFX HD includes “Eternal Calm”, a cutscene vignette that bridges the events between FFX and FFX-2, a bonus English audio drama that covers the events after X-2, as well as FFX-2 HD (with bonus final mission) and the international version of Final Fantasy X with high definition paint.

The bonus vignette and audio drama are surprisingly entertaining for fans of the game, as they expand upon the characters in the main story after the events of both games. Yuna’s sudden change from calm and reserved summoner in FFX to outspoken, gun-toting songstress in FFX-2 is much better explained with the context “Eternal Calm” provides. The audio drama is a bit drier as it is from the viewpoint of two entirely new characters, but it still gives a bit more personality to the heroes from X.

As far as new features though, that’s pretty much it for FFX. The inclusion of the international version of the game does give a few stat bonuses, trophies and an expert Sphere Grid for skill trees, but nothing that is overtly noticeable to the average player. The graphics cleanup is definitely present in this remaster. Textures are less rough and colors are much brighter. The CGI scenes are still a little grainy due to the upscaling, but this is to be expected. At times. some of the NPC models when standing right next to the redone main characters look terrible in comparison, so it’s easy to see where the majority of the cleanup work went. The original game was still really good looking for its time, but the higher definition really makes it easier on the eyes.

The audio is also much sharper and touts some really well done remasters of the soundtrack (particularly the Besaid Island theme). Some of the themes do suffer from sounding too grandiose when pushed away from the more simplistic songs of the original PS2 release, but they still maintain a high quality of sound overall.

For those who haven’t played it, Final Fantasy X follows a group of heroes protecting Summoner Yuna on her journey to defeat the city-destroying creature named Sin. Along the way they find trouble, family, loss, and love, among all the other dramatic things Final Fantasy characters seemed to get wrapped up in. The gameplay is a traditional turn-based system, with the added bonus of being able to cycle in party members during a battle.

For all the years that have passed (13 to be exact), the story and game mechanics hold up surprisingly well. The remaster has kept the fluidity of it all perfectly encapsulated to re-experience. So is this HD remaster worth it? While it does deliver on its high quality resolution, that’s bout ALL it delivers on. The lack of being able to install the game on the internal drive (which would have likely cut down the numerous loading screens players are inundated with), as well as no dual audio track switch for voiceover, or even a command to get back to the main menu of the disc (you have to quit out entirely), make FFX HD a truly bare-bones remake. For $40, it feels like players should be getting a little more convenience for their dollar, rather than re-buying the EXACT same technical experience they had on the PS2. The graphics and audio are nice, but without the nostalgia factor, FFX HD proves it’s not worth the full price tag.

‘Injustice: Gods Among Us’ Demo Trailer