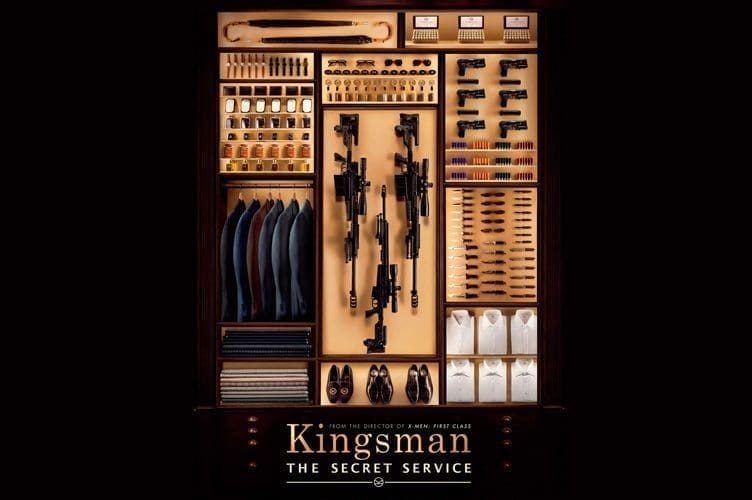 Even though you may not be familiar with the name Matthew Vaughn, you should be familiar with the films that he has created over the past couple of years. He started out with the much loved gangster film Layer Cake starring Daniel Craig. Then he made the transition into the fantasy genre with the film Stardust. Next he would tackle superhero films by making Kick-Ass and then X-Men: First Class. His latest creation also stems from a well regarded comic book and is called Kingsman: The Secret Service.

Taking place in England, the film centers around a teenager that goes by the nickname ‘Eggsy’ (Taron Egerton). He is a bright kid but he has a downtrodden home life due to his mother being with an abusive boyfriend. One day he gets into an altercation with a kid that he doesn’t like and then ends up in jail. Miraculously he is able to call in favor which leads to him being released and then recruited into a secret spy organization by a mysterious man named Galahad (Colin Firth). From then on, Eggsy is put through numerous trials in order to see if he is worthy of becoming an official member of the group. While all of that is taking place, a strange multibillionaire named Valentine (Samuel L. Jackson) is working on a plan to exterminate the majority of the human race.

Kingsman: The Secret Service is a fresh take on an old franchise. The film harkens back to the James Bond films of the 60’s and 70’s where when we look back on the technology it feels very outdated and silly. This film however, takes that silliness and infuses it into the overall narrative. It does it in such a way that never feels out of place but more grounded into the world that is created. Performances all around are stellar. Coming off of the King’s Speech, Colin Firth is magnificent. He is able to perfectly embody the charm of James Bond with a somewhat whimsical nature. He is the man that everyone wants to be but he never comes across as arrogant in the slightest. Adding to that, Samuel L. Jackson also gives a very memorable performance by speaking with a comical lisp the entire time. He is pure evil but he is so funny that you can’t help but like him.

The action in the film is insane. Most of the fight scenes are comprised of very long takes with amped up action set pieces that I have never seen before in a film. One such scene is set within a racist/sexist Baptist church and what happens in that scene will having you continually grinning throughout.

Although there is much to love about this film, I do have one glaring problem it: the overuse and over reliance of CGI. Most of the film is comprised of practical effects, however when CGI is used it looks very fake. One specific shot including a airport hanger looks as bad as those old FMV video games from the 90’s. Nevertheless, that is a minor issue in an otherwise great film. If you are looking for a fun, action-packed spy film to see, you definitely can’t go wrong with Kingsman: The Secret Service.

About Kingsman: The Secret Service

Synopsis: A young English teen gets recruited into a secret spy organization in order to help stop a crazed multimillionaire.