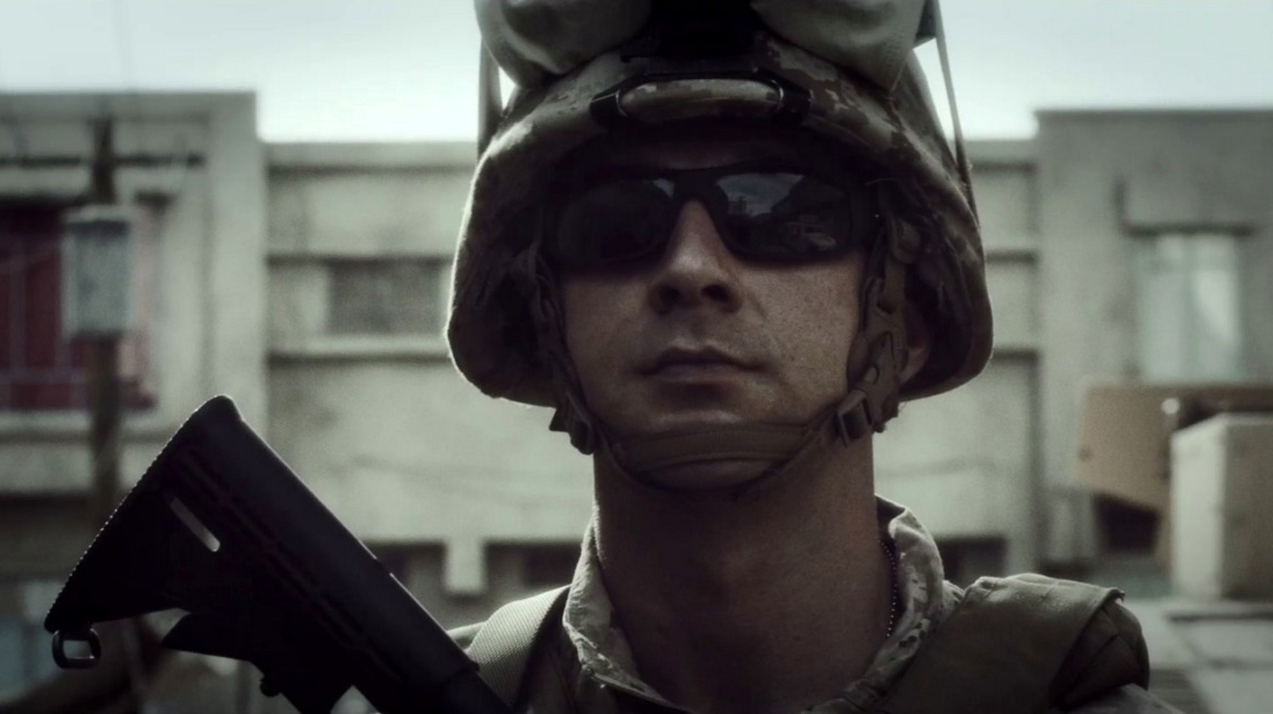 Shia LaBeouf was born in Los Angeles, California as the only child to Shayna and Jeffrey Craig LaBeouf. His mother has been a dancer, ballerina, visual artist, and jewelry designer. His father is a Vietnam Vet who has held down countless jobs over the course of his lifetime.  Shia’s upbringing was far from normal due to his parents being “hippies”, getting divorced, and his father being both verbally and mentally abusive towards him. He took that negativity and channeled it into something positive by diving into the visual and performing arts. Around age 10, Shia performed at comedy clubs in his area until he found an agent and eventutally got the role of Louis Stevens on the Disney show Even Stevens. Since then he has become more and more recognized due to his roles in such films as: Holes, Transformers, and Fury. His newest role has his teaming up with former collaborator Dito Montiel for a film entitled Man Down.

In a post-apocalyptic version of America, Gabriel Drummer (Shia LaBeouf) is teamed up with a man named Devin Roberts (Jai Courtney) who are both in search of Gabriel’s son. Both men are former marines and the film flashes back  to times where they are going through basic training as well as times where they are living normal, civilian lives. There are also flashbacks to Gabriel having a long conversation with a military physiatrist – Counselor Peyon (Gary Oldman) that focus on something they keep referring to as “the incident”.  Through these sporadic jumps in time you see how Gabriel becomes the man he is and why he’s so desperate in trying to find his son.

The film is good but definetely not great. To start off on a positive note, the best aspect of the film has to be the performances. No one actor outshines another but I specifically have to mention Jai Courtney. In the majority of the films that I’ve seen where he plays a major role, he usually comes across as very wooden and unlikable. Here however, his charisma perfectly plays off of Shia’s character and the two actually feel like long time friends. It’s that frienship that somewhat saves the film from being trite and overly pretentious.

To put it plain and simple, this is a film about military service men and the hell that they have to go through before, during, and after enlisting. It’s very dark subject matter that should come across as both enlightening and disheartening. However in the end, when the viel is finally pulled away, the overall message of the film feels completely overcomplicated and annoying. I understand why the post apocalpytic elements exist but they are used in completely the wrong way. Specifially the CGI that comprises the majority of those elements is absolutely terrible and completely distracting. It’s a symptom of the film having a very low budget but they could have gone about showing that world in a completely less hamfisted way by using more practical components.

Man Down is a film that needed to made. It’s a worthy message that is very important in our day and age. Nonetheless, the way in which that message is delivered could have been done in a much more interesting and  realistic way. It’s an unfortunate shame that great performances are glued together with material that falls completely flat in the end.

Synopsis: In a post-apocalyptic world, a former soldier must deal with his past while he attempts to find his son.