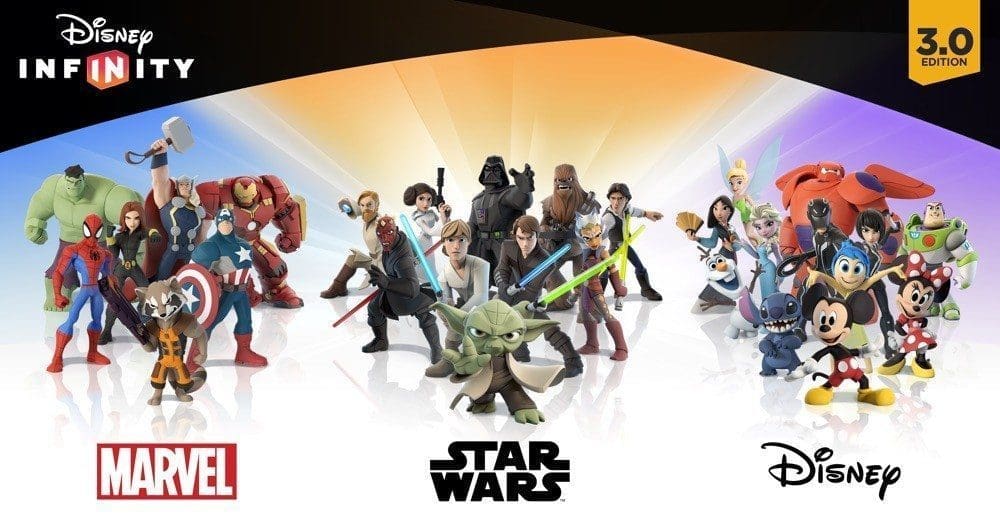 Quick note before we dive in: This review will be a brief look at Disney Infinity 3.0 Edition as a whole before a more in depth look at the Twilight of the Republic Playset. Individual characters will be discussed in their relevant playsets as I continue to review other playsets in future reviews. Now then, let’s do this.

If even a couple of years ago somebody told me that one day I’d be playing a game that was a product of Disney, Marvel, and LucasArts I’d have told them they were out of their mind. The foothold the Walt Disney Company and its countless subsidies has on the entertainment industry cannot be overstated, and the fruits of their collaboration is evident in Disney Infinity 3.0 Edition. Despite a lifelong love of, and even employment by, Disney I never took the plunge into any iterations of Disney Infinity. However after my time with the 3.0 Edition starter pack one thing became abundantly clear: I picked the perfect time to dive in.

Disney Infinity 3.0 Edition’s foremost advantage is the aforementioned collection of intellectual properties (IPs). Not only are there three major branches from Disney’s arsenal present, they came to play (pun intended). Star Wars brought characters from all six canonical movies, the Clone Wars, and Rebels. Marvel has announced Age of Ultron content to come such as the Hulkbuster and the titular villain himself to start. Disney brought more Originals with Mickey and Minnie, everyone’s favorite snowman Olaf, and much to my personal delight: Sam and Quorra from Tron: Legacy. The presence of a such a niche series like Tron shows Disney’s commitment to varied gameplay and material as they continue to expand Infinity to seemingly endless limits. The offerings of 3.0’s Toybox is more extensive than ever before. More than just a mere add on in lieu of playsets, this Toybox will be receiving future add-on content in their own playsets of sorts. But to be honest it’s hard to picture the Toybox having room for more content with everything packed in already at launch. From walking down Main Street at the Disney Parks, to driving my speeder around Tattooine, to fighting baddies in Halloweentown and everything in between. The Toybox lets creativity roam free, and lets players (like myself) download content from the community when you run into builder’s block.

As awesome as the Toybox is, it’s not the only thing that makes the 3.0 Edition of Disney Infinity incredible. The initial Star Wars content, as well as the content to come, is daunting. Virtually no canonical story content will be unrepresented from Infinity 3.0 Edition, which is quite the feat. Available at launch, and included in the starter pack, is the Twilight of the Republic Playset which has content from the prequel trilogy of movies as well as the Clone Wars. Star Wars Rebels characters are also usable in the Playset after finding a “champion coin” for each character scattered throughout the universe, many of which I stumbled upon easily while completing the main story quests. Each figure in Disney Infinity levels up independently, with various skill trees players can customize and follow as they see fit. New combat techniques, traversal methods, and damage output are just a few of the different skills available to players. Certain characters are more suited for different scenarios and can be swapped out at any time. If a character meets their demise, the game will simply prompt you to tag in a new character while the previous character recuperates and gets ready for battle once more. This mechanic lets players stave off total defeat for a while and can get through most challenges with a couple swaps if needed. This is great for kids who are simply having fun playing, or stubborn people like me who just can’t seem to kill a squad of death troopers on extreme difficulty.

After completing the campaign, there is still much more content within the playset for players to pursue. In addition to tracking down those handy champion coins, completed missions all have optional objectives that players can try to accomplish in order to improve their mission rating. There are also numerous side quests offered by NPCs throughout the universe that you can complete alongside the campaign or afterward. After spending six or seven hours going through the campaign and taking in the faithfully recreated Star Wars universe I still have a huge list of available missions waiting for me; possibly a greater number of missions than I’ve completed!

As much as gamers gripe about graphics and performance, fun truly is the name of the game and Disney Infinity 3.0 Edition has the formula for infinite fun down to a science. Although the starter pack itself (with no additional figures purchased) may seem a bit light, I was more than satisfied with the available content in Twilight of the Republic and the Toybox, and I eagerly await future playsets to expand this already massive world even further. Disney Infinity is a fantastic action-adventure game for gamers of all ages and the inclusion of local co-op lets you spread the fun to those around you. Whether you’re a fan of “classic” Disney, Marvel, or Star Wars, Disney Infinity 3.0 Edition has something for you, with the latter bringing the most content out of the gate. Don’t let the fear or disdain of having to buy additional figures that plagues this “Toys to Life” genre discourage you, Disney Infinity is a deep, expansive experience that should not be missed. I may have been a late adopter of Disney Infinity, but I will be a proponent for years to come.

[…] To check out the Starter Pack/Twilight of the Republic review, click here. […]