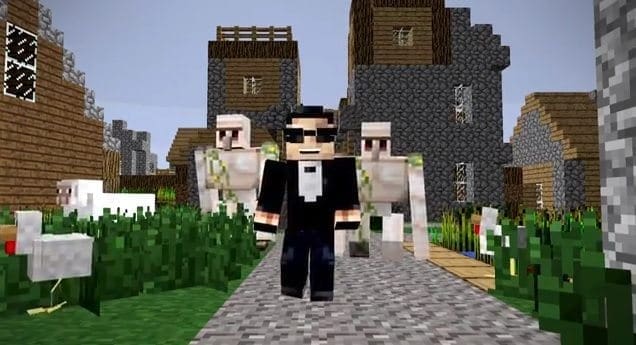 We just received some very interesting and intriguing news from Secret Service PR that Red 5 Studios and Stage5.tv have teamed up to bring you a “mind-blowing mash-up video parody” of PSY and MINECRAFT.  Check the details sent to us below!

May 16, 2013 – Los Angeles, CA – Entertainment company Red 5 Studios™ and its entertainment network Stage 5 TV™ have debuted a new music video today that pairs one of pop-music’s biggest sensations with one of video gaming’s most beloved indie classics for the ultimate video mash-up.  Set to their version of PSY’s massive viral hit “Gentlemen” and using Minecraft “machinima” style graphics, Stage 5 is ready to blow minds with what could possibly be the most addictive video game/pop-music parody ever to grace the internet’s sandbox, “Minecraft Grieferman.”
Watch the confectious new video for “Minecraft Grieferman” now:

Ever wondered what PSY would look like cubed in Minecraft?  Well, Stage 5 TV has you covered. “Minecraft Grieferman” pays tribute to anyone that’s ever had a person “grief” them while gaming; something surely everyone who’s been online can relate to.  The PSY “Grieferman” plots and schemes from his “secret sand cave” as you build up your castle and raise your ocelots, only to blow it all to bits when you’re eating your cake.
The parody was written by Andrew Volpe, former lead singer of the band Ludo with game capture, editing and post provided by members of the Stage 5 team.  “Minecraft Grieferman” is Stage 5’s latest music/video game parody, following-up hits like “One More Fight,” a parody of Maroon 5’s “One More Night,” “For The Win,” which features cameos by Al Yankovic, Aisha Tyler, Grant Imahara and Ashley Holliday and “Project Cosplay.”
Gaming fans can visit Stage5.tv to find additional music videos, with new releases coming every other Thursday.
About Stage 5 TV
Stage 5 TV is an entertainment network dedicated to emerging trends in gaming and geek culture. Our mission is to engage viewers with smart, sophisticated, and well-crafted comedic and dramatic programming, ongoing documentaries, and live event coverage celebrating the interests, culture, and stories of gamers and geeks everywhere. http://www.youtube.com/stage5
For More Information:
http://www.stage5.tv
http://www.red5studios.com