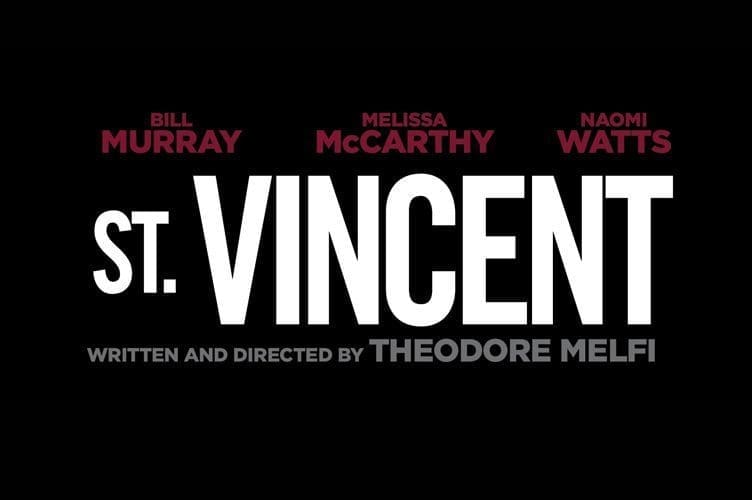 If you have no idea who Bill Murray is then you must have been living under a rock for the last thirty years or so. Bill Murray is the actor who has helped to bring us such classic and respected films as Ghostbusters, Caddyshack, Groundhog Day, and Lost in Translation. He is the type of man who instantly steals the spotlight from anyone onscreen merely by appearing within the frame. His humor is regarded as dry yet absolutely hilarious and his charisma oozes out of every nook and cranny. Bill Murray is simply the guy who you want as a best friend because you know that he will always be there to cheer you up. That type of personality is displayed prominently within his new film entitled St. Vincent.

Vincent (Bill Murray) is a brash, unapologetic , and incredibly rude older gentleman who lives  alone in a very messy house with his cat. He has a Russian stripper/ prostitute named Daka (Naomi Watts) who visits him from time to time and he occasionally goes and takes care of an older, senile woman who lives at an assisted living facility.  One day a single mom named Maggie (Melissa McCarthy) and her young son named Oliver (Jaeden Lieberher) move in next door to Vincent. They have a slight verbal altercation which leads to signification tension between the two adults. Later on, Oliver gets locked out of his house and is forced to spend time with Vincent until his mother gets home from work. From there the two develop an uncanny friendship and help each other out in interesting and hilarious ways. This is Bill Murray’s best performance since Lost in Translation and one where he truly transforms himself into another character. Although most of the things he does throughout the film are very crude, his charisma shines through in nearly every scene. Simply put, he is the guy that you should hate but just can’t. Another fantastic performance would be that of Melissa McCarthy. She plays an absolutely humorless character but a character that you can sympathize with on a grand scale. The clashing of her and Murray works excellently and never feels played out or forced in the least bit. Lastly, acting newcomer Jaeden Lieberher gives it his all and comes across as a very likeable sidekick to that of Murray. The pairing of the two is exceptional and the yin and yang of their opposite personalities helps to progress their friendship in a realistic fashion.

Although the plot of the film has been used time and time again (Up, Gran Torino, Bad Words), this iteration feels like a fresh take that goes in unexpected directions. There is much more depth to the character of Vincent and director Theodore Melfi is able to explore that depth in both interesting and comedic ways. This is a film that layers drama and comedy within the same scene but does it to the degree that the two genres are never forced to compete.  It’s funny when it needs to be and it’s sad when it needs to be. St. Vincent is an outstanding film that perfectly explores the old adage of not judging a book by its cover.