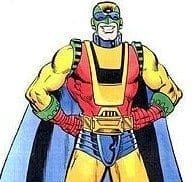 In honor of Halloween, I thought I would put together a list of some of the worst costumes ever seen in comic books.

11. Captain Ultra – I think this guy started out as a gag in Fantastic Four, and just kept showing up. Sometimes referred to as Captain Colorblind. 9. Red Bee – At least his arms will stay fresh in the fridge thanks to all that saran wrap.

7. Blackhawks – I feel sorry for these guys. The Blackhawks were an aviation unit that fought during World War 2. In the 70s, everything was going superhero, so some knucklehead decided to give these guys more heroic costumes. Some came out ok, but poor Chuck ended up covered in ears.

6. Power Girl – Power Girl’s original costume is classic; if you have ever been to a con of any sort, you have probably seen someone wearing it. This redesign from the 90s, not so classic. Headbands = bad.

5. Aquaman – And then there was the time that Aquaman decided to dress in deep-sea camouflage, I guess so he could sneak up on fish.

4. Rainbow Raider – The only thing worse than this guy’s costume is his civilian identity: Roy G Bivolo. At least he sticks with his theme.

2. Ma Hunkel, the Red Tornado – A grandma who put on a costume to scare off hooligans in her neighborhood, the original Red Tornado was (almost) a founding member of the Justice Society.

1. Herbie, the Fat Fury – Make no mistake, Herbie is awesome. A weird comic from the 50s about a fat kid and his magic lollipop having adventures, Herbie was not meant to be taken too seriously.