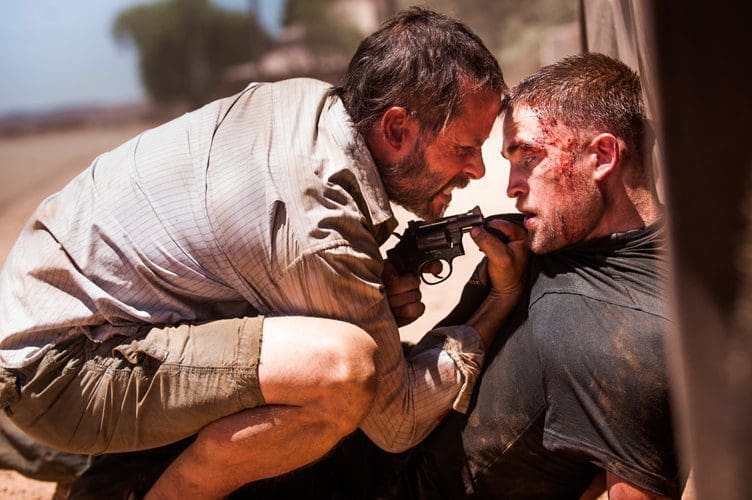 Guy Pearce is one hell of an actor. No matter what the role may be, he is a person who can transform himself into character both mentally and physically. He got his start in acting in the 1986 Austrialian TV show entitled Neighbours. Since then, he has gained public notoriety by starring in such films as L.A. Confidential, Memento, and Iron Man 3. He is a man who I have always held in such high regard mostly because he doesn’t parade himself in the limelight just like so many Hollywood A-listers. He is a man’s man and embodies that type both onscreen and off. Yet again though, Pearce is able to do a full transformation into a character for director David Michôd’s new film entitled The Rover.

When a man has nothing to lose, he will stop at nothing to accomplish his goals. That is the main through-line of this near-future, post-apocalyptic tale. Ten years after the entire world has collapsed into poverty and strife, a downtrodden man named Eric (Guy Pearce) is slowly traversing the Australian outback both aimless and destitute. Everything changes in a split second when a group of three marauders decide to steal Eric’s most prized possession – his car. Desperate to get it back, he chases them as far as he can in another vehicle until he haphazardly meets up with an autistic U.S. Redneck named Rey (Robert Pattinson). Together they strive to hunt down the location of Eric’s car by any means necessary.

The Rover is a bit tedious but an altogether satisfying film in the end. The world that Michôd is able to create is very lush with personality even though that personality is of a very cruel nature. This isn’t a post-apocoplytic world where people are known to be eating each other, but one where people solve problems with guns rather than with words. Pearce does an excellent job portraying a man who has lost everything. His physical appearance alone sets the tone for his character – large clumps of hair missing with cuts that adorn his entire body. He is a man of few words, but when he does speak, the audience listens intently. Breaking away from his role in the Twilight films, Robert Pattinson shows that he can be much more than a sparkly vampire. With his terrible teeth, thick redneck accent, and his superb performance of someone with Autism, Pattinson is almost unrecognizable in the film. He plays a perfect complement to Pearce’s no-nonsense demeanor and the pair of men light up the screen every chance that they get.

Aside from performances, the story is somewhat lack-luster. Character motivations are very unclear throughout and the task of getting back Eric’s car is a little too prolonged. Adding onto that, scenes tend to overstay their welcome with shots that go on and on without giving the audience anymore information. Nevertheless, the performances alone are reason enough to recommend The Rover and although the story may lack, it has an ending that you won’t soon forget.

Synopsis: In a post-apocalyptic Australia, a man gets his car stolen and he does everything he can to try and get it back.