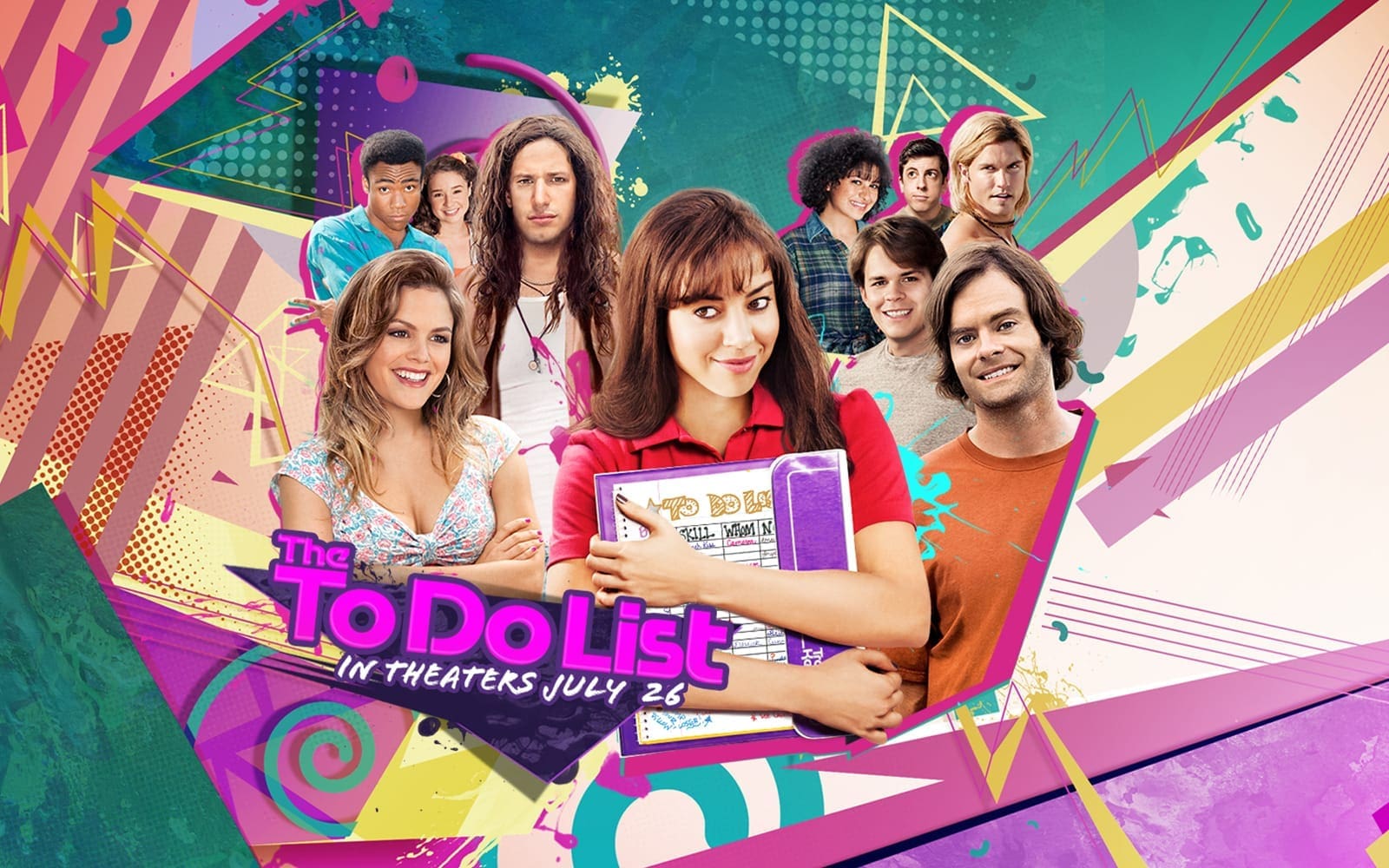 My first experience seeing Aubrey Plaza onscreen would have to be the 2009 comedy Funny People. Even though she had a very small role in that film where she essentially just played herself, something about her stuck with me. Then after discovering the NBC show Parks and Recreation, it hit me on how truly funny she can be. She tends to play very dry, pissed off characters that she can fully utilize her expert comedic timing to pull off. She’s the girl in the movie where you don’t know her name but you love every time she pops onscreen. So after getting her first big leading role in the 2012 film Safety Not Guaranteed, she is stealing the spotlight again in the new film The To Do List directed by Maggie Carey.

The film takes place in 1993 and is about a girl named Brandy (Aubrey Plaza) who is incredibly smart but also very naïve. She has just graduated from high school and has grand aspirations for college. Her two best friends Fiona (Alia Shawkat) and Wendy (Sarah Steele) and her sister Amber (Rachel Bilson) put a thought into her head about how college will be in the aspect of sexual encounters. Due to the fact that Brandy is a virgin at everything related to sex, she decides to come out of her shell and make a list of all the sexual exploits she wishes to accomplish before she heads off to college.

The best way to think of The To Do List would be the female version of Superbad. From all the posters and trailers the film appears to be very tame and almost geared towards the female gender. I will say that if you viewed it that way just like I did, you would be so very wrong. The film is crude, unabashed, and whole heartily deserving of a hard R rating. Aubrey Plaza is truly able to show off her comedic talent and goes places with her character that the majority of actresses nowadays wouldn’t dare to go. To put that point into perspective, there is a blowjob gag in the film that had me laughing for well over a minute straight. It’s a film that knows where it can draw the line and instead leaps well over it to give you comedy gold.

Drawing a lot of its inspiration for comedic elements from the time period it takes place; the nostalgic factor began to set in on me with great force. From pagers and skorts, to water beds and horrible 90’s fashion, the film slaps you in the face with how things used to be and pokes fun at it at the same time. Apart from the set design, the supporting cast is filled with A-list celebrities that chew up the screen every chance that they get. Bill Hader, Andy Samberg, Clark Gregg, and Christopher Mintz-Plasse are just a small portion of the hilarious cast that is able to give Plaza the much needed foundation to stand on. There is not one performance in the film that I didn’t like or laugh at; everyone knows how to play their parts and be funny in the process.

Even with all of the elements that I absolutely loved about the film, one small portion detracted from it: the beginning. The film starts off somewhat clumsy with little to no laughs for about the first twenty minutes. However as soon as Brandy writes the list, the film shoots into overdrive and continues all the way till the end credits. I can’t recommend this film enough and if you are looking for something both hilarious and crude to laugh at this summer, The To Do List is a film that you won’t want to throw away afterwards.

Synopsis: A naïve, virgin highschool graduate decides to try and accomplish numerous sexual exploits before she goes off to college.