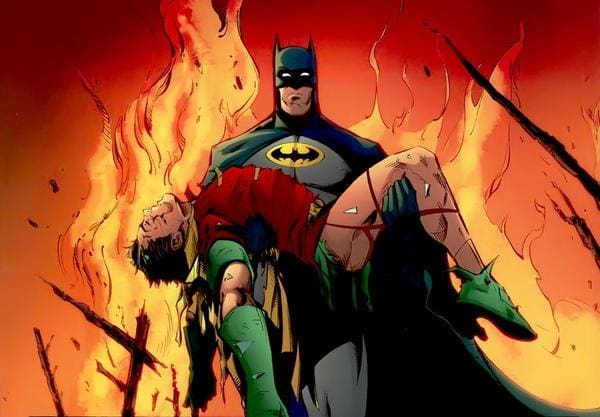 Last week, the cast of The Comic Book Insider died in a tragic explosion.  While we await their respawn, let’s discuss the top deaths in geek culture.  Warning:  HERE THERE BE SPOILERS!

11. Jason Todd – Dick Grayson’s replacement as Robin, he was wildly unpopular, so much so that DC Comics sponsored a phone-in poll to see whether he should live or die. He lost the poll, and the Joker beat him to death with a crowbar. All voting should end like this.

10. Tokyo – Godzilla tried his best, but was only ever able to seriously wound Tokyo. It took anime to blow Tokyo up. I haven’t seen a lot of anime, but that seems to be the common theme.

9. Greedo – Gunned down in self-defense by Han Solo after trying to shoot him.

7. The guy in “Scanners” – This film came out over 30 years ago, and still has not been topped in terms of “Head explosion.” Scanners is a great film, but if you ask anyone what they remember from it, this is it. **Warning** Graphic video.

6. Rowdy Roddy Piper in “They Live” – Sacrificed his life to save earth from the aliens, and went out giving them the finger. 5. Paul Reubens (aka Pee-wee Herman) in the “Buffy the Vampire Slayer” film – One of the best death scenes in cinematic history. Also, the longest. And the funniest. Why isn’t there an Oscar for this category?
In reference to #9, I know Han shot first: I’m not stupid, I was just messing with you. Geeks are so much fun to poke with a stick. Unfortunately, no one will read this, because they are too busy making death threats in the comments section. At this very moment, there is a guy in Texas boarding a plane to hunt me down.

3. Mortal Kombat – This taught a generation of gamers that you could kill an enemy by pulling out his spinal cord.

2. Johnny Depp in “Nightmare on Elm Street” – Before he was known as “The guy who was replaced by Richard Grieco on 21 Jump Street,” Johnny was featured as Victim #3 in this popular horror film, in which he dies in a volcano of blood. No, really, it is literally a volcano of blood. Maybe a geyser. I’m no blood geologist.

1. Edward, Jacob, and Bela all die in a freak combine-harvester accident – This didn’t happen in the Twilight books or the movies, but features prominently in my fan fiction.

SHAUN OF THE DEAD Presented by Cult Classics