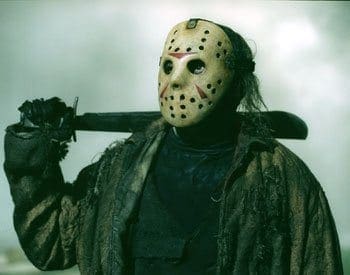 11. Jason Voorhees has to decide if he wants to send HIS kid to summer camp.

10. That Texas cannibal family has converted to running their chainsaws on ethanol, because it is better for the environment.

9. Freddy Krueger still invades your dreams, but now he wants to sell you life insurance.

8. Michael Meyers only slays kids that wander onto his lawn.

7. You now have to say Candyman’s name six times to summon him, because he is hard of hearing.

6. The Hills Have Eyes, but they need Lasik.

5. The Leprechaun now has all of his gold invested in mutual funds.

4. I know what you did last summer, but no one listens to me since my ungrateful children put me in a nursing home.

3. Chucky has exchanged his trademark overalls for a nice track suit.

2. The only Scream appearing in the next movie is “I’ve Fallen and I Can’t Get Up!”.

1. Hannibal Lechter no longer eats kidneys with fava beans and a nice chiante, because they make him gassy.