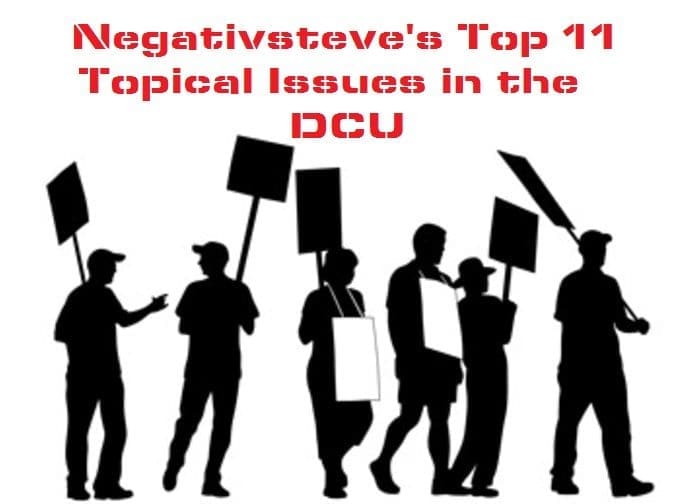 Last week, the creative team of the critically acclaimed DC comic “Batwoman” walked off the book after DC editorial canceled their plans to have Batwoman marry her lesbian partner. This was just the latest in a series of incidents involving DC Comics running afoul of hot-button current issues.

11. Senate GOPs are demanding that Superman be deported due to lack of citizenship, and are mulling over the creation of a planetary fence to keep out other illegal aliens

10. The Teen Titans are being investigated by the Gotham labor board over alleged violations of child labor laws

9. The EPA has banned Plastic Man until he can prove that he is non-carcinogenic and bio-degradable

8. The Sierra Club has begun to protest Hawkman as a danger to indigenous species of rodents

7. The UN has demanded that Firestorm allow a team of independent observers to verify that he is not in violation of the Geneva Conventions

6. The department of Housing and Urban Development has threatened to shut down Arkham Asylum over mass safety issues and deplorable living conditions

5. The IRS is investigating Aquaman for paying no taxes on the pirate treasures that he has salvaged

4. NOM, the National Organization of Men, have levied several complaints over the sexist hiring practices of the Birds of Prey

3. Fans took to the internet to complain that, although the new colors are fun, the cheap plastic used to make Cyborg-C is cheap and not durable enough to be effective

2. Batman has received a cease-and-desist order from a federal court, pending several lawsuits regarding patent claims on the Batmobile and Batarang technologies

1. Black Canary is now homeless after

Top 11 Things Not to Say While Watching Blade Runner