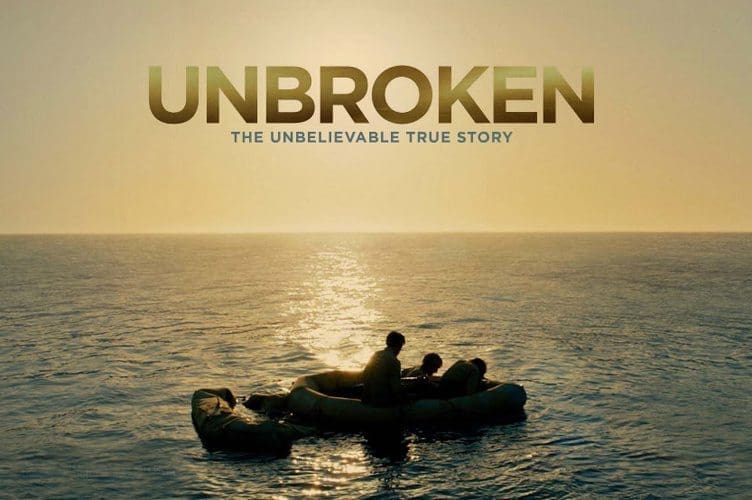 World War II will forever be known as the greatest war ever fought. It lasted from 1939 to 1945, it involved 61 different countries from around the world, and over 60 million people were killed during it. While it was going on and up till now, Hollywood has been making films depicting the war in several different aspects. Most of these aspects tend to focus on what happened during the attack on Pearl Harbor as well as what happened during the Normandy beach invasion on D-Day. Also, a good number of the films tend to center on a group of people fighting in the war instead of spotlighting one particular individual. For Angelina Jolie’s new World War II film entitled Unbroken, she has gone against the norm and has decided to highlight the true story of one specific man.

Jack O’Connell plays Louis Zamperini, an Olympic runner who enlisted in the United States Army Air Forces to help fight in World War II. While on a simple rescue mission over the Pacific ocean, all of the engines fail on the plane that Louis and his crew are flying in. Crashing into the ocean, Louis and only a handful of his crew members survive and are forced to wait for rescue in two inflatable rafts. Eventually a Japanese ship finds them and forces them into prisoner of war camps where atrocious events later occur.

While it isn’t the best World War II film that I’ve ever seen, it definitely captures the tragedy involved within the war in a very poignant way. The beginning of the film feels somewhat disjointed as the events of the plane crash are intercut with flashbacks of Louis as a kid and as an Olympic runner. Everything seen in the flashbacks is done in a very hamfisted way and completely undercut the brilliant present day production of the events in the film. Specifically the actor who plays young Louis (C.J. Valleroy) definitely looks the part but lacks any attainable charisma within the role. His acting is not atrocious but it feels very wooden and two-dimensional. Jack O’Connell on the other hand is absolutely marvelous! He is able to perfectly capture the suffering that the real Louis Zamperini had to endure and make you feel actual pain for the character. The way in which he delivers his dialogue never comes across as phony but instead he is able to elicit a deep, emotional reaction simply with how he delivers every single word. Lastly, the physical condition that O’Connell had to be in to play the part is truly astounding and helps to round out the character in the most believable way possible. In addition, Takamasa Ishihara who plays the main antagonist in the film should also be mentioned for his performance. He is able to realistically portray a man who isn’t picking on Louis simply due to his job title but more for his own personal gain. Due to this, the conflict that develops between the two men comes across as completely authentic and engaging to watch.

As noted above, my main complaint with the film has to be how it gives backstory on the main character. It’s not necessarily bad but it does detract from the rest of the film as a whole. With that being said, Unbroken is an excellent biopic that perfectly encapsulates the war from one man’s perspective.

Synopsis: The true story of Louis Zamperini, an Olympic Runner who survived a harrowing ordeal during the events of World War II.

The Legend Of Tarzan | Movie Review