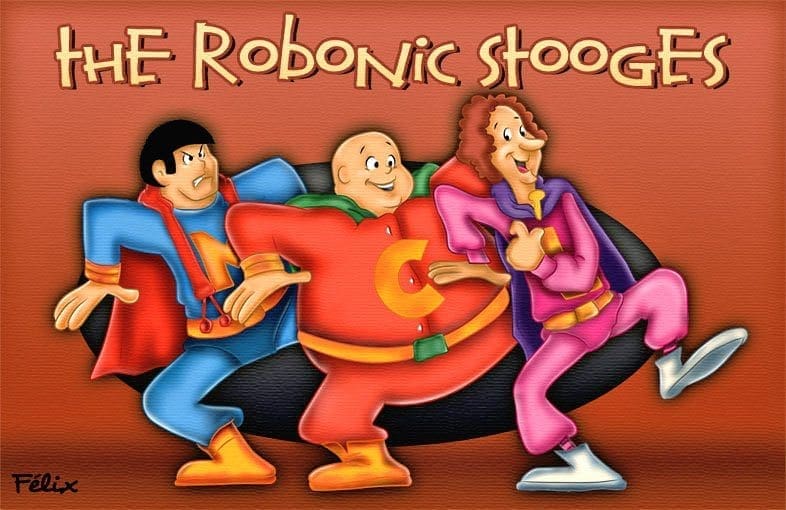 In a recent list, I made a reference to the obscure 60s tv show “My Mother the Car”, and a couple of friends accused me of making it up.  Let me assure you, there is enough nutzoid content out there that I don’t really need to make anything up.  Here are eleven prime examples.

*Please note: All of these are real.  This is not an April Fool’s prank.  I will include links in the blog entry.

11. The Ghostbusters – We’re all big fans of the Ghostbusters, right?  Not that cheap Bill Murray knockoff, but the original 1975 tv show starring two guys from F-Troop and a Gorilla, who travel around the world fighting ghosts with a weird camera device.  And a gorilla, obviously.
http://www.imdb.com/title/tt0072505/

10. The Robonic Stooges – They’re stooges!  They’re robots!  They’re superheroes!  What could possibly go wrong?  Thankfully, the series only last a year, so they didn’t have time to create RoboShemp.
http://en.wikipedia.org/wiki/The_Robonic_Stooges

9. Adult Thermonuclear Samurai Elephants – After the Teenage Mutant Ninja Turtles became hugely popular, the market was flooded with cheap parodies and rip-offs.  This was Marvel’s attempt at cashing in on the “Three adjectives and an animal” craze. Other titles included Naive Inter-Dimensional Commando Koalas, Post Atomic Cyborg Gerbils, Adolescent Radioactive Black Belt Hamsters, and about a dozen more.
http://www.imwan.com/phpBB3/viewtopic.php?f=33&t=68012

8. Heil Honey I’m Home! – This was a BBC show that aired in 1990.  It dealt with a fictional Adolph Hitler and Eva Braun moving in next to a Jewish couple in the suburbs.  Apparently, the Brits don’t appreciate Hitler humor, and the show was canceled after one episode.
http://en.wikipedia.org/wiki/Heil_Honey_I%27m_Home!

7. The Terror of Tiny Town – In this 1938 western, a gunslinger comes to Tiny Town to stir up trouble, and the town must rally to defeat him.  Pretty standard cowboy plot, except for the fact that the cast was entirely made up of little people, and the sets were designed proportionally.
http://www.imdb.com/title/tt0030845/?ref_=fn_al_tt_1

5. The Incredibly Strange Creatures that Stopped Living and Became Mixed Up Zombies – Billed as the first monster musical, this 1964 film saw a carnival magician turning patrons into zombies.  Some say that this film does not exist, but I have seen it, and it is every bit as good as the title suggests.
http://en.wikipedia.org/wiki/The_Incredibly_Strange_Creatures_Who_Stopped_Living_and_Became_Mixed-Up_Zombies

4. Liquid Sky – All you need to know is “Aliens that feed in orgasms”, and is considered an influential classic in some circles.
http://www.imdb.com/title/tt0085852/?ref_=fn_al_tt_1

3. Far Out Space Nuts – Did you like the dominant/submissive interplay between Gilligan and the Skipper, but wish it had fewer women and took place in outer space.  If so, this show is for you.  Featuring the original Gilligan, Bob Denver, and Chuck McCann doing a spot-on Skipper imitation, this 1975 kid’s show featured the two as maintenance workers who were stuck in a space ship when they thought the “Launch” announcement said “Lunch”.
http://www.imdb.com/title/tt0072499/?ref_=fn_al_tt_1

2. Lidsville – This 1971 kid’s show had Butch Patrick, the kid from the Munsters, trapped in a world where all of the residents were talking hats, ruled by a crotchety Charles Nelson Reilly.  It’s a wonder we managed to get out of the 70s without an entire generation of children hooked on drugs.
http://www.imdb.com/title/tt0066679/?ref_=fn_al_tt_1