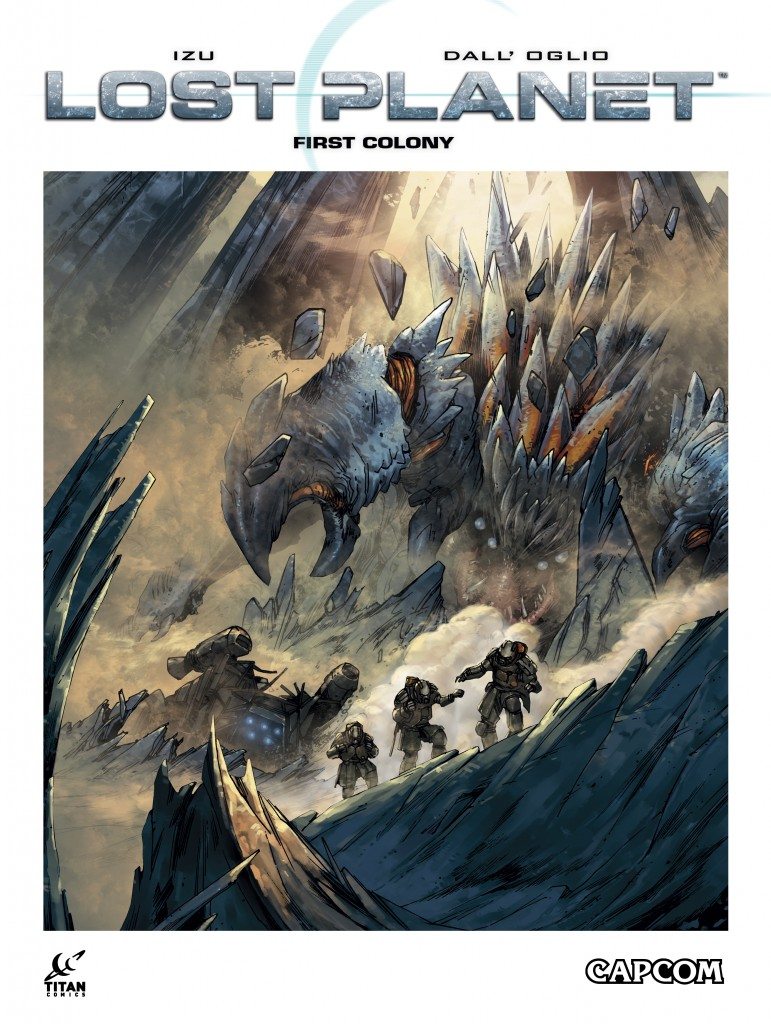 If you’re a fan of the video games, LOST PLANET: First Colony is well worth adding to your collection. This hardcover graphic novel (measuring 8 1/2 by 11 inches for those of you folks that care) has a gorgeous cover and particularly lovely endpapers if your aesthetic leans towards harsh frozen tundra and giant alien monsters, as mine does. First Colony is a prequel to the video game LOST PLANET 3, which in turn is a prequel to the first and second LOST PLANET video games. Again, if you’re already a fan, you’ll appreciate returning to E.D.N III as the crew of the pirate ship Crusader struggles to survive a crash landing and dangers of this unfriendly planet.

If you’re not already a fan, you can probably do without this one. Admittedly, I haven’t played the LOST PLANET games, but I was attracted to do this review because of the intriguing universe in which it takes place. Here’s the synopsis that snagged my interest:

The planet of E.D.N. III seemed ripe for colonization – its icy climes ready to be warmed and terraformed. That was, until the first settlers discovered the indigenous Akrid – ravenous creatures, powered by their own thermal energy, who proved resistant to every weapon the colonists could muster.That first terraforming effort ended in tragedy, with the colony – and its rich haul of terraforming equipment – hastily abandoned. Now, looking for an easy mark, the ragtag crew of the pirate vessel Crusader have set course for E.D.N. III, looking to pillage these tempting resources, before NeoVenus Construction (NEVEC) can swoop in and reclaim their investment! But E.D.N. III takes coldly to strangers, and the Akrid are ready to welcome them into their fearsome embrace… Fans of the LOST PLANET® series, and star-spanning science fiction, shouldn’t miss out on this vibrantly-illustrated, self-contained epic. Who will live? Who will die? And what dark secrets of E.D.N. III will be revealed in the process?

Unfortunately, the LOST PLANET: First Colony didn’t live up to my expectations.  After reading, I was left wanting more…but not in a way that would drive me to the video games to get my answers.  The story itself was weak and rushed. Especially for being so short (only 48 pages) the disorganization was disappointing. While it introduced how the crew of the pirate ship Crusader found out about E.D.N. III, the first quarter of the book could have been condensed or even eliminated for the sake of the narrative.  I felt like the graphic novel dawdled and lagged in certain places, then skimmed over the interesting parts.  Maybe if there were more battles with the Arkid, more threat from the returning NEVEC…There was a lost opportunity for real character development by choosing to set this pre-prequel 40 years before the events LOST PLANET 3, but focus on an unrelated group of pirates instead of the first colonizers. As it was, I never really had a chance to invest in these characters, and when people started dying, I didn’t really care.  The hardest part was that the story was weak, not terrible.  This universe has so much potential, but there wasn’t an opportunity for it to be fully realized in this particular story line.

Overall, I would rate the art here as good.  There were a few times when I had to flip back a few pages and puzzle at faces because I couldn’t tell the difference between characters.  But then there are also moments, mostly when depicting the alien landscape of E.D.N. III and it’s fearsome natives the Arkid, that are really beautiful.

It is very clear that the target audience for LOST PLANET: First Colony is established LOST PLANET fans.  For non-fans, this graphic novel won’t spoil anything or hurt your chances of enjoying the video game, but know that there’s nothing to gain by starting here.

LOST PLANET 3 is published by Capcon and is currently available for Microsoft Windows, Playstation 3, and Xbox 360.