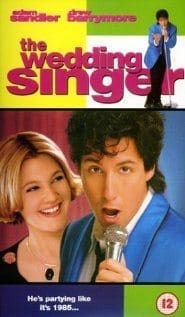 Because I haven’t come across any new music that I’d like to review as of late, and I haven’t been to any major shows in a while, I decided to finally compile a small list of film soundtracks that I really love listening to – something I’ve been wanting to do for some time now.  Whether they be the actual film score or just the music that was used throughout the movie, there are quite a few, I’ve noticed, that stuck out to me over the years.  This is all based purely on my own opinion, and they are in no particular order.  Feel free to comment on what your favorites are!

1) The Wedding Singer – I’ll admit, I have a soft spot for those memorable 80’s hits… even when

Adam Sandler is singing them.  Songs like “You Spin Me Right Round” by Dead or Alive, “White Wedding” by Billy Idol, “Boys Don’t Cry” by The Cure, “Blue Monday” by New Order and “China Girl” by David Bowie get me dancing… or wanting to dance, but not actually dancing because I don’t quite know how.  That’s just a handful of the awesome 80’s songs on this album.  I find myself not skipping any of the tracks when I pop this album in.  And I can’t help it – Adam Sandler singing “Love Stinks” gets me every time. 2) Lost Highway – This soundtrack is a 90’s alternative dream to me.  It includes my all-time favorite artist, Nine Inch Nails, Marilyn Manson, Smashing Pumpkins, Rammstein, Lou Reed, and David Bowie (who can’t get enough David Bowie?!).  A weird, but awesome soundtrack for a weird, but awesome film.  I still don’t quite understand the film, but I think that’s David Lynch’s intent on pretty much whatever he does.  Just confuse the hell out of the audience and leave them speechless for a few hours.  Well while I’m speechless, I’ll listen to this soundtrack. for KISS… until I watched this movie.  Everything they were portraying, everything they stood for was pure ROCK AND ROLL, man.  It was evil, mothers hated it, it was corrupting the youth, it was REBELLION!  And I’m convinced they made corpse paint famous – though of course, they never called it that (I know there’s a million people who disagree with me on that, mainly my elitist metal-head friends, but y’all can shut the frack up).  The soundtrack doesn’t sound quite so evil and demonic nowadays, what with bands like Immortal and Behemoth being the black and death metal parents fear today, but back then, they scared the living shit out of families.  I try to remind myself that when listening to this soundtrack, because without some of these bands (Thin Lizzy, Ted Nugent, AC/DC, and The Ramones), some of our beloved black and death metal bands wouldn’t be around today.  Oh, and I’d like to point out that David Bowie appears on this album too.

4) The Virgin Suicides – The main reason I love this soundtrack so much is because it’s got two songs from Heart featured on it, “Magic Man” and “Crazy On You”.  And I heart Heart.  Electric Light Orchestra’s “Strange Magic” is listed as well (funny, they were also on the Detroit Rock City soundtrack), and I really like “Hello It’s Me” by Todd Rundgren.  Oh, and I can’t forget the last song on the album, “Come Sail Away”.  Did anyone else just imagine Cartman singing it super fast?

5) Party Monster – Many of you probably won’t know about this film at all,

but it was a re-telling of a murder that happened back in the late 80’s/early 90’s Club Kid days in New York City.  Macaulay Culkin and Seth Green were the stars.  Wilmer Valderrama, Chloë Sevigny and Marilyn Manson made appearances as well.  Valderrama (who played Fez on “That 70’s Show”) plays a still famous DJ Keoki, who is featured on the soundtrack.  Keoki still tours the world hosting many raves/parties today.  There aren’t a whole bunch of artists that are immediately recognizable, but there are quite a few songs that would get people dancing.  One of my favorites is Ladytron’s “Seventeen”.

6) Sin City – The score for this film is amazing.  It’s really like watching the movie in your head.  It sounds sneaky and mysterious.  To me, it has that 1950’s detective story feel to it.  Director Robert Rodriguez co-composed this score, alongside John Debney and Graeme Revell, and the Hollywood Studio Symphony.

Simon & Garfunkel, The Doors, Bob Dylan, the Beach Boys, the Mamas & the Papas, Jefferson Airplane, Lynyrd Skynyrd, Bob Segar, Willie Nelson… and that’s not even the half of it.  Not to mention, songs included in the film, but not on the soundtrack by artists like Hank Williams, KC & the Sunshine Band, Jackson Browne, Jimi Hendrix, and Fleetwood Mac.  This is one of the best film soundtracks I’ve ever come across, hands down.

8) Donnie Darko – There’s quite a few good 80’s songs listed on this soundtrack as well.  Of course, the first song that comes to mind to most is Gary Jules’s “Mad World” – an eerily honest song.  Some of my favorites, aside from that one, are “Never Tear Us Apart” from INXS, “Love Will Tear Us Apart” from Joy Division, and “Head Over Heels” from Tears for Fears.  This soundtrack has a rather gothic feel to it.

Honorable mentions: Anything from Hans Zimmer, especially the Inception score. “Get On Up” Movie Review