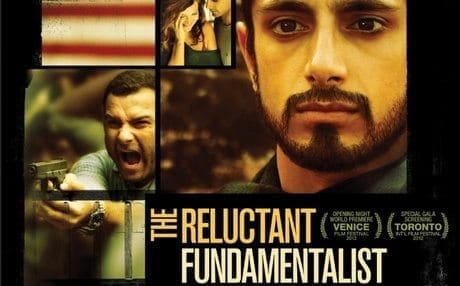 If you don’t read further than this sentence: SEE THIS MOVIE.

Still with me? Good. This movie is, in a nutshell, about the American dream vs the call of home, from the point of view of a Muslim.

Out of the nutshell, this movie takes place in two separate times, so I’ll give you the intro for both.

2011: The movie opens in Lahore, Pakistan, with a family enjoying a musical performance at their home. Meanwhile, an American couple is beset upon in the streets, and the husband taken. The CIA start a search for him, and the involvement of the Lahore police is upsetting to the locals, as the police don’t do nearly as much if something bad happens to a Pakistani. Changez Khan (Riz Ahmed) is a professor at the local university, which turns out to be the same university the kidnapped man worked at. A journalist living in Lahore, Bobby (Liev Schreiber), gets the chance to interview Changez about what’s happened.

2001: Changez Khan is a Pakistani who recently graduated from Princeton and is hired by a Financial Analyst firm on Wall Street. He’s a natural, and is quickly rising the ranks, taking job after job, flying to other countries with his boss, and partner in the firm, Jim Cross (Keifer Sutherland). During a party Cross takes him to, Changez meets Erica (Kate Hudson) an up-and-coming artist. They hit it off and begin seeing each other. Out of the country when 9/11 happens, he notices a drastic change in how he is treated when he returns to American soil. He starts to wonder if America is everything it’s cracked up to be.

I know a lot of critics are being really harsh on this movie, but I’m not a movie “critic,” I’m a movie “reviewer.” I don’t pick apart movies, waxing poetically about nuance, didacticism, or ideological resolution. I watch movies with an eye for what is entertaining. And this movie is very entertaining. It’s a thriller that, while it might have been able to shave off a few minutes here and there, was amazingly riveting. It’s a very interesting look at “the other side” of our “War on Terror” here in America. A lot of innocent people were treated very poorly, even hurt or killed, in the wake of 9/11, and this film shows us what that might have felt like from the other side. You’ve got to be open-minded to really take this film in, but if you can be, I think you’ll be intrigued.

Stellar performance from Riz Ahmed, who, with a quirk of an eyebrow, can make you know exactly what he’s feeling, whether it’s love, freedom, outrage, or loneliness. Finding out afterwards that he also did some of the singing was a happy treat. (Most of the soundtrack is foreign, but there is a haunting beauty, and emotions that transcend words.) Liev Schreiber made a solid showing, as always. One of the great actors of this time, and he never disappoints (me, at least!). Sutherland was the perfect boss, powerful, encouraging, but ultimately failing to understand his protegé. Also wonderful performances from renowned Indian actors Om Puri and Shabana Azmi as Khan’s parents. The only disappointing acting came from Kate Hudson. It might just be a personal thing, but I didn’t feel she was at all right for the role of the young woman involved with Khan. Her performance, for me, left a lot to be desired.

If you can, in fact, manage to keep an open mind while seeing this, you might see a world of questions open up before you. What is right, in the face of foreign intrusion? What is acceptable behavior, in the face of overwhelming prejudice? What is success really worth, if you have to give up all you hold sacred for it? And what would you give up, for all that you hold sacred? I think there are many questions posed in this film, and I think that it would behoove us all to see it, to ask these questions, and try to come up with reasonable answers.

For its powerful messages, for the gorgeous soundtrack and costuming/scenery, and for stellar performances by nearly everyone, I give The Reluctant Fundamentalist:

About The Reluctant Fundamentalist

Synopsis: A young Pakistani man is chasing corporate success on Wall Street. He finds himself embroiled in a conflict between his American Dream, a hostage crisis, and the enduring call of his family’s homeland.