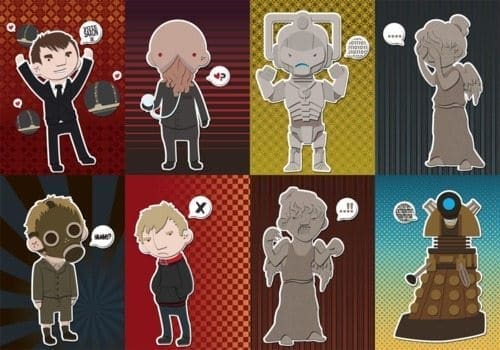 During his nearly 50 years of travelling through time and space, Doctor Who has encountered all manner of frightening creatures, but there are some things out there that are just too terrifying, even for a Timelord.

11. Dahlinks – Distant cousins of the Daleks, except these all smoke and speak with Eastern European accents.

10. The Crood – These aliens share one hive-mind, which is totally devoted to farting and racist jokes.

9. NFL Union Negotiators – These are the most horrible creatures in the known universe; they can take away your pension, eliminate your job, and invalidate my “Replacement Refs” joke.

8. Creeping Angels – These insidious beasts look like statues, but when you’re not looking directly at them, they take pictures of you and post them anonymously to the internet.

7. Peeps – Not even jelly babies could protect the Doctor from this marshmellowy menace.

6. Nerds – There is no place the TARDIS can go that will save them from nerds complaining about continuity errors and time paradoxes.

4. Insane Clown Posse – Sonic screwdriver, meet sonic piledriver.  Time Travel, how does it work?  It must be a miracle.

2. The warrior caste from the planet Kardash – These nightmares seem to appear everywhere at once, no matter how often you change the channel.

1. Biebermen – These robotic menaces will intend to destroy the humans with their bad music and worse haircuts.
Follow more of NegativSteve’s rants on his Tumblr: Steve Hates Aquaman.

May The Fourth Be With You!!