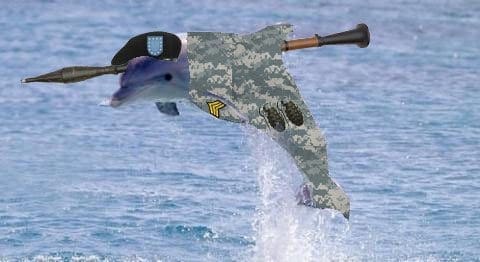 It seems that several Ukrainian-trained attack dolphins have escaped from their base (port?) in Sevastopol.

According to an article from the English-language page of the Russian International News Agency (RIA Novosti) web page, the Ukrainians  restarted the special killer marine mammal program last October.  During the Cold War, the Soviet Navy trained dolphins for combat as far back as 1973.  After the breakup of the USSR, the Black Sea Fleet was divvied up between the Russian Federation and the Ukrainian Navy, and the Ukrainians received the dolphin project. The Ukrainian Navy largely retasked the dolphins for peacetime purposes, like working with disabled children, to keep the unit together.

According to RIA Novosti, the Ukrainian Defense Ministry is refusing to verify the story, and will not even confirm the existence of military dolphins.  However, in the same article, a former Soviet naval officer, Yury Playachenko, states that AWOL dolphins were not uncommon during the Soviet years:

“If a male dolphin saw a female dolphin during the mating season, then he would immediately set off after her. But they came back in a week or so.”

In addition to Ukraine, several other nations are known to have military marine mammal programs.  The United States Navy has a program involving dolphins and sea lions, started in 1960.  And not all of the Soviet dolphins went to the Ukrainian program; according to a BBC article, some of the Russian dolphins were sold to Iran during the early 2000s.

Military programs related to dolphins tend to be very tight-lipped; the idea of using intelligent marine mammals for dangerous tasks like combat can draw criticism.  Per a PBS Frontline article, US military marine mammals are trained to detect and mark underwater mines, and retrieve objects.  US Navy dolphins are also supposedly trained to “tag” enemy personnel for training.  Rumors hold that dolphins were also trained to use a special gun to kill enemy frogmen.

One persistent rumor holds that three several Soviet frogmen were killed in Cam Ranh Bay in Vietnam during the war.  This would mean that almost twenty percent of Russian casualties during the war were caused by Navy dolphins.  The US Navy denies this incident took place, or that military dolphins are trained to kill.