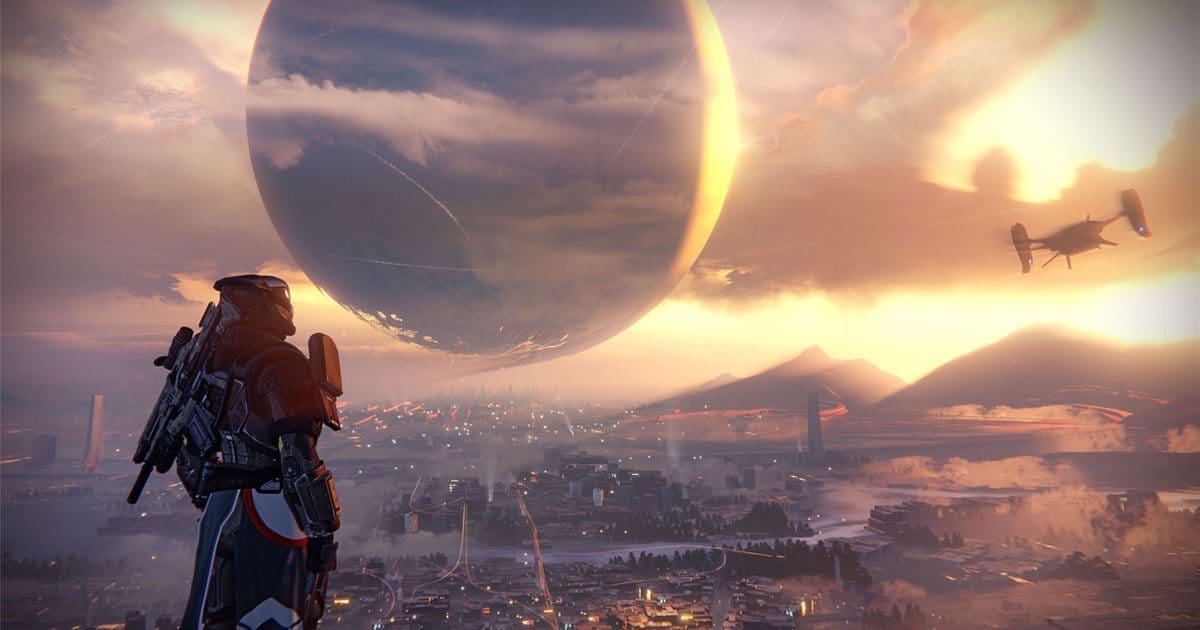 After a huge hype train that spanned well over six months, Destiny finally hit consoles last week. The much-anticipated project from Halo developers Bungie, Destiny challenged players to join up with friends against alien enemies and ‘become legend.’ So is the massive multiplayer-esque shooter a brave new foray into next-gen consoles, or just a another footnote in gaming history?

Story: There’s a giant jawbreaker in the sky that does stuff…and some aliens too.

If you were hoping that Destiny would have even a wisp of decent story, prepare to become legendarily disappointed. The campaign revolves around playing a guardian revived by a Ghost (voiced as boringly as possible by Peter Dinklage), that is charged with fighting various alien races that wish to destroy the last light of the universe: the Traveler.

Sounds generic and mundane? That’s because it is.

The ‘story’ of Destiny is not well thought out or played through. Campaign missions are prefaced with a few lines of vague exposition before players are thrust into the action. The few cinematics that include slightly intriguing characters are far between and oddly enough, players can actually skip some story missions altogether.

By the time players reach the end, it’s hard to recall what was even accomplished. Perhaps what is most aggravating is the games’ blatant lead-off at the end, indicating that there is much more story to come, when there was very little present in the first place. It’s upsetting to see what could be a hugely rich universe with Mass Effect levels of context and back story be squandered in favor of repetitive missions and grimoire cards.

Gameplay: Travel to the planet, hack the things, kill the aliens, rinse and repeat.

The campaign missions serve as another offense to stifled variety, as it often revolves around the formula of encountering an alien enemy, having your Ghost hack into some unknown device or server for info, fighting through enemy waves and eventually a single boss character. Although you have the option to play these solo, it becomes tedious without friends to fulfill your fireteam.

The better breaks from this repetitive recipe are undoubtedly Strikes, Raids and Crucible (player vs. player) matches. Strikes offer up the chance of replaying areas for good loot with much more of a challenge. Raids are timed release content that involves newer missions that are extraordinarily challenging and require six people. Crucible alternatively gives way to more traditionally known FPS multiplayer staples like death match or domination with other guardians.

You can moderately customize your guardian, get loot drops, and grind for experience points. Public Events are meant for dozens of players to join in on a randomized single mission goal, but they are pitifully rare to encounter. Reputation with different factions (which the game does a poor job of explaining) can be earned for the chance of better items for leveling up.

As far as shooting enemies, using abilities, and running all over hostile planets the game feels and functions solidly like Halo. Supercharged attacks don’t feel unnecessarily overpowered but matchmaking for PvP could use some improvement. The enemy AI difficulty sadly takes a dive towards the end of the campaign, but is rectified by the ability to choose higher difficulty in mission replays.

Destiny looks fantastic, even though most of the destinations are boring.

The games’ backdrops of Mars’ red deserts, the jungles of Venus or even the sparseness of the Moon are all beautifully rendered. The only takeaway from this is the fact that most of the environments are barren with clusters of similarly ruined buildings. It’s great to ride a speeder across the desolate areas of Russia, but after awhile everything begins to look the same.

Guardians themselves look cool and sleek with different armor styles and weapons. The aesthetic of Destiny feels like a re-purposed science fiction tech, and it works remarkably well. The 30 fps cap doesn’t appear to mar the game in any way, as it runs without issue. It’s also worth noting that it streams really well to the PS Vita utilizing PS4 Link. Despite its terrible story and campaign delivery, Destiny is still an addicting game for at least 20 levels. After that, the game truly becomes an MMO with rewards for those dedicated to the grind and not much else for the mildly interested. It is nice to see that Bungie has plans to feed more content into the game throughout the next few months, potentially staving off a quickly pumped out sequel.

If you had high hopes that Destiny would take you on an epic adventure or wanted to play it solo, don’t waste your money. If you enjoy MMOs, getting together with large groups of friends to play raids or have fun revisiting FPS multiplayer, then it might be worth the cash. Destiny feels like a lot of plot and universe potential has been squandered in favor of another multiplayer-focused game with a few different carrot-and-stick options to keep people playing.