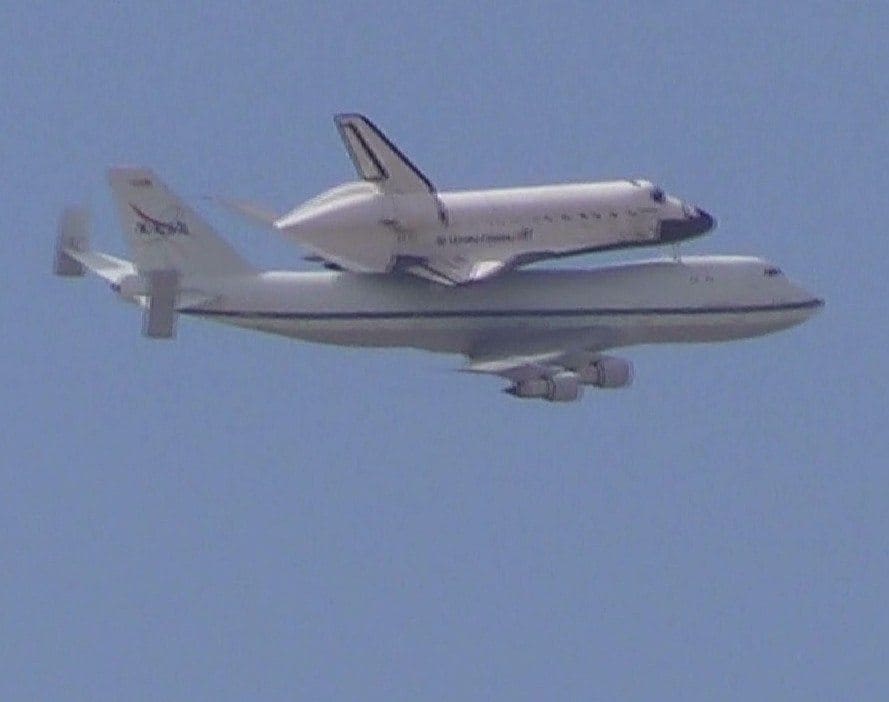 The space shuttle Endeavor flew over the University of Arizona at an altitude of approximately 1500 feet at 11:15 AM today.  It was clearly visible from the U of A campus.

Per an AZ StarNet article, the shuttle made the low-altitude flyover as a tribute to shuttle astronaut and ex-Navy SEAL Mark Kelly and his wife former U.S. Congresswoman Gabrielle Giffords.  Kelly flew on Endeavor’s final mission prior to decomissioning.  The shuttle is enroute to Dryden Flight Research Center at Edwards Air Force Base in California.

According to ABC News, NASA officials were quoted as saying “the flight over Tucson will add no additional time or cost to the delivery of Endeavour [to Edwards AFB].”

At the U of A, an email went out to various listserves advising employees and students that the shuttle would pass over the U of A mall at arround 11:15AM.  Dozens, if not hundreds people set their work aside for a few minutes to see the spectacle.  Throngs of people stood on the grass and walkways, some with cameras, hoping to catch a glimpse of the shuttle.

The shuttle appeared from the east, moving westward, right on schedule.  The altitude was so low that both the shuttle and the NASA-modified 747 carrying it were both clearly visible.  Due to obstructions like trees and buildings, the spacecraft was only visible for about one minute.  However, the view was spectacular.