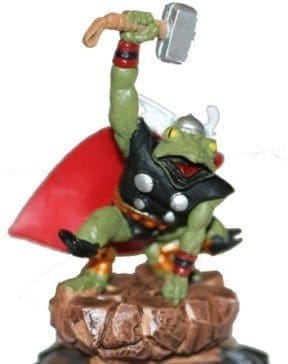 Facebook
Twitter
ReddIt
Pinterest
Tumblr
Email
Comic book movies are a hot ticket item these days, and everyone in Hollywood is scrambling to get one into production.   However, not every comic character is ready for the big screen.

(Please note: I did not make any of these up.  Professional writers made good money to create these characters.)

11. Demolition Man, or “D-Man” – Not the Sylvester Stallone film, although Stallone is also a comic character who should not be made into a movie.  I am referring to the former super-steroid-addicted-pro-wrestler turned homeless member of the Avengers.  Probably not the best role model for youngsters

9. Ambush Bug – This Superman pest knew he was in a comic book, routinely addressed the readers and made fun of DC staff, had a toy doll as a sidekick, and fought a giant koala. Only one person would ever see a movie about him, and that person is me.

7. Starfox – The brother of Thanos and a former Avenger, Eros of Titan was an interstellar warrior and ladies man. After a few years of this, some egghead figured out that his power to stimulate the pleasure centers in a human’s brain and remove their inhibitions was remarkably close to what a roofie did, and he was never spoken of again.

6. The Boy Commandos – Jack Kirby’s tale of an “Elite squad of orphaned children” fighting in World War 2 seemed heroic in the 40s, but now it would just be considered child endangerment.

5. Maggott – This South African mutant was briefly a member of the X-Men; he had two slugs that lived inside him and acted as his digestive system. They could leave his body and eat for him. Not everyone gets to be blessed with super speed.
4. Fatman, the Human Flying Saucer – Created by the minds that brought you the incredibly popular Captain Marvel family of comics, this was a story about a fat guy who could turn himself into a flying saucer. Even Maggott thinks he is stupid.

3. NFL Superpro – Considered by many to be the worst comic book Marvel ever published, this was the story of an injured ex-football player who fights crime with an indestructible football jersey. Throw in some evil cheerleaders and a giant mutant mascot, and the script just writes itself.  A re-imagining of this character as NHL Superpro probably won’t happen, either.

2. Thor, Frog of Thunder – Don’t get me wrong, Walt Simonson’s story about Thor, magically transformed into a frog and fighting rats in Central Park is a classic, I just don’t want to see Toni Darling change her costume.

1. Howard the Duck – Sure, everyone loves a comic about a grouchy, cigar-smoking duck in a world of humans, but what kind of crack-smoker would want to make a movie about it?
0 0 vote
Article Rating